I've decided to judge The Yellow Room Short Story Competition (closed March 20th) in a slightly different way this time. I'm going to read the stories in a specific order. The first ones I'm going to read are those stories which I think have an arresting title. There are 22 of these out of 98 entries. Here are the titles:
Reading With Robert
Camus and The Art of Dancing With God
Chocolate Heaven, Chocolate Hell
Writer's Cramp
Tornado Days
Unmusical Bumps
The Only Way To Learn About Knives
The Soul Catcher
Solomon's Sugar
Rapture in Apple Custard
Facebook in Heaven
Stripy Socks
The Ambulance Chaser
Matoose Rowsay
The Scalene Triangle
Master Chef
Truffle
Real Care Baby
The End of the Pier Show
An Aeroplane Screams Into a Dive
The Snow Leopard
Blood and Sand

It will be interesting to see how many of these stories get onto the shortlist, and whether any of them will be prize winners. Is a story's title important? I think it is. It's the first thing an editor/reader or competition judge sees. I want a title to grab my attention. These 22 did.

From experience, I anticipate the stories with the two word titles being some of the most mundane. I'll report back later.

Oh yes, and I got my fourth rejection from Woman's Weekly yesterday. Boo hoo! I'm in good company, though, because Della Galton had four back from them last week as well. I can hear Jane Wenham-Jones in my ear, saying, 'Smack their bottoms and send them out again!' Jane is the most persistent writer I know, which is partly why she's so successful. What do you mean you haven't bought her book, Wannabe A Writer yet?
Posted by Jo at 04:01 2 comments: 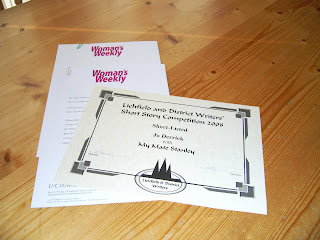 The post on Saturday brought two rejections from Woman's Weekly. I'd been waiting weeks for a response. I have two more stories with them, so fingers crossed for those.

The same post brought a small success. My story, My Mate Stanley, was shortlisted in The Lichfield & District Writers Competition, for which I received a nice certificate. This is the first success I've had in weeks, so it was very welcome and a great motivator. The adjudicator was kind enough to give me some feedback on my story (free of charge) so I know where to improve it. Sadly, the 2008 competition will be their last.
Posted by Jo at 02:17 4 comments: 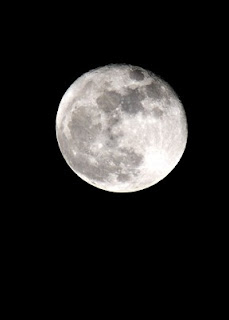 I've recently been asked about my experiences of writers' responses to criticism or feedback. I rattled off a few lines then thought it might be useful as a blog entry. I'm a bit nervous, though, about opening this particular can of worms!

Over the fifteen years I've been editing magazines, first QWF, then Cadenza and now The Yellow Room, I've read thousands of submissions and competition entries. I don't consider myself to be any sort of expert, but I read a lot. I tend to know what works and what doesn’t. I know what my readers enjoy and I’m not going to publish anything that doesn’t ‘work for me’. Another editor out there might think it’s the best piece of writing they’ve seen. Fine. They can publish it. It’s a good job we all have different tastes, otherwise there’d be even fewer markets than there are now.

I send out between five and ten rejection letters a week, depending on how many submissions I've had time to read. I like to let writers down gently, as I know, being a writer myself, how hard rejections are to deal with, particularly in the beginning. However, I feel that good writers learn from the comments they receive when a piece of work is rejected. It’s that old adage – we learn more from our mistakes. No matter how brilliant the writer or how often he/she has been published, that writer can still learn and benefit from constructive criticism. I think the more we write, the more we improve. Practice makes perfect, and all that! It’s up to a writer to choose whether they take any criticism on board. They can choose to ignore constructive comments if they wish. However, they may find different editors saying the same thing each time they try a different market or publisher. If this is the case, then the writer should listen and take note.

I guess the sort of bland comments you might receive about your work at a writers group or from some publishers/editors such as ‘it didn’t work for me’ are pretty useless, unless that statement is elaborated upon. Why didn't it work? As the writer, it's up to you to ask the question! Equally as useless are comments like ‘it was good’. Better perhaps, ‘I liked the bit where….’ Or ‘I think you’ve structured the story really well’ or ‘I can really empathise with that character’. I try to include something positive and specific when I’m giving feedback on writers’ work. Sometimes, particularly in the case of beginner writers, it can sometimes be very difficult to find anything positive and it’s tempting to be rather vague and say something like, ‘that’s a really original idea’. I do think it’s important to say something positive at the beginning of a rejection letter, rather than just shoot a writer down in flames. I quite often say to beginner writers, ‘you need to work on your technique’. Writing technique is something that only comes with practice, and differs greatly depending on whether you're writing an article, screenplay, novel or short story.

There have been a few cases when writers have written or emailed to take issue with a rejection I’ve sent. Thankfully, it doesn't happen often. I don't mind if the writer is objecting to my 'nit-picking' issues or if they tell me I've entirely missed the point (however, sometimes it does make you question the clarity of their writing, if they can't get the point over), but there are some writers who make very basic mistakes. It's when these writers obviously can’t see the flaws in their work, even when they have been pointed out, that makes me cross. They have no respect for your judgement, so you’re fighting a losing battle. These are the kinds of writers who don’t improve, so confident are they in their ability. And yes, I view their next submission with a whole different mindset. I’m too busy thinking about the person behind the writing, and the fact that they’re not willing to take on board any criticism and it does colour my judgement, I’m afraid. I have no time for really stroppy writers. They are the sort of people I’d rather not deal with. Beginners often make the mistake of writing back saying, 'Yes, but that's exactly what happened in real life'. In other words, far be it from them to change it. Real life isn't fiction. You have to reflect real life, sure, but that funny incident in the doctor's surgery doesn't always translate into a good short story.

I don’t like writing judge’s reports for short story competitions. I haven’t included one in issue 2 of The Yellow Room, despite publishing the winning story in the 2008 competition. I can see that they are helpful to most people who have entered, but I tend to get more flak from what I say in those reports than from anything else. Life is too short. My attitude now is ‘these are the stories I’ve chosen. Like it or lump it.’ However, if I were asked to judge a short story competition and to write a report, then I would. However, I would try to avoid negative comments as much as possible.

All in all, I think writers are a sensitive bunch and as an editor, you have to tread carefully. I want writers to feel supported and encouraged. I can think of several writers who submitted work of a dubious quality in the early days of QWF, who have gone on to have several novels published by mainstream publishers. In their early writing career they were grateful for any feedback, acted upon it and produced better work each time. I went on to publish several of their stories, as a consequence of their persistence and hard work. This then gave them some of the necessary kudos when they were submitting their first novels to literary agents and publishers.

So... over to you. Do you feel annoyed by an editor's criticism of your work? Do you appreciate feedback if your manuscript is rejected? Do you act upon it? Are there any circumstances in which you'd blatantly ignore an editor's comments or criticism? Do you think there is a certain arrogance about editors? I'd be very interested to hear of your experiences.

I've almost finished putting together Issue 2 of The Yellow Room. I intended to review two books for this issue, but I never did get round to reading them (although I did start one great little collection of short stories). It's too late for Issue 2, but is there anyone out there who has had reviews published and would like to review for The Yellow Room? There won't be a shed load of books coming your way. I get very few in a year, but it's one extra job I don't have time for! Please email me if you're interested.
Posted by Jo at 08:52 2 comments:

The Yellow Room Short Story Competition closes on 20th March, and we've hardly had any entries! I'm just hoping there's enough in the kitty to pay the cash prizes. Many small press magazines, including The Yellow Room, rely on a percentage of these competition fees for running costs, so it's great when there's a big entry. If you have a short story ready to send out, please could I ask if you'd consider entering it in the competition? The entry fee is £4 which is a lot less than some competitions, and if you're a competent writer, then you stand a good chance of a prize. Please see the website (www.theyellowroom-magazine.co.uk) for further details. Tell as many of your friends or your writers' group about The Yellow Room Competition as you can! I still have copies of Issue 1 to sell, too. The price is £5.50 per copy, cheques made payable to J M Derrick and sent to: 1 Blake Close, Bilton, Rugby CV22 7LJ. Issue 2 of The Yellow Room comes out in April/May.
Posted by Jo at 03:24 6 comments: