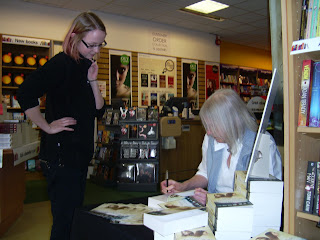 I was thrilled to receive my invitation to the launch of Sally Zigmond’s first novel, Hope Against Hope. The launch took place on a Friday evening almost two weeks ago at The Pump Rooms in Harrogate. I’ve now just finished reading Hope Against Hope (review to follow) and its Harrogate setting brought back fond memories of that afternoon as well as other wonderful times spent with Sally in her former home town.
I have known Sally since 1994 when I was pregnant with my first child, Matthew. She sent me one of the first short stories she’d written, apologising for not having read the guidelines. “You don’t need guidelines,” I told her, “You write just the sort of story I want to publish.” Sally went on to write many more short stories for QWF (the women’s literary magazine I published for 12 years) and eventually became my assistant editor. As well as enjoying a literary partnership, Sally and I have become great friends, so much so that she was my witness at my second wedding in 2006.
It was therefore an honour to be asked to the launch of Hope Against Hope. I know how hard Sally has worked to bring this novel to fruition and how many times her hopes have been dashed, when, after initial enthusiasm, agents and publishers backed down. If any writer deserves published success, then it’s Sally. She’s one of the most talented and unassuming writers I have the pleasure to know. She is also ever willing to pass on her experience to others and help them on their writing journey.
My trip to Harrogate didn’t bode well, however, when I received a phone call from The Crown Hotel (featured many times in Hope Against Hope) the day before my departure, saying that they’d overbooked and despite me having booked a room there three weeks in advance, they’d had to move me to another hotel, Grant’s. I wasn’t best pleased, as you can imagine. Staying at The Crown was going to be part and parcel of the whole experience for me. To add insult to injury when I arrived at Grant’s my room wasn’t ready, despite me having left instructions saying I wanted to book in early, so I was shown to a rather dingy, pokey little room on the second floor. The plus side was that I was given a hefty discount, subsidised by The Crown, for the inconvenience and room service at Grant’s was second-to-none. (It was the best fillet steak I’ve ever eaten and the Chocolate Marquise was to die for!)
Anyway, the sun shone on the righteous the day of Sally’s launch. Sally was doing her first book signing at Waterstone’s in James Street in the early afternoon, so I went along to support her, as had the lovely Jane Smith and a few other writer friends of Sally’s. We were like a bunch of over-excited schoolgirls, as Sally sat in pride of place at the front of the shop, surrounded by piles of copies of her novel and a huge placard featuring the alluring cover design. 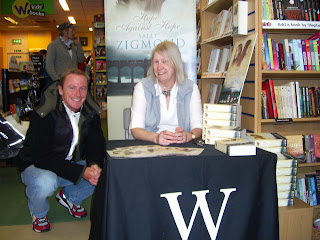 It was fun to watch who was buying Hope Against Hope and getting their copies signed. There was also some eye candy in the form of Craig, Sally’s husband’s personal trainer! Sally said it felt like her wedding day, but without the groom. I guess that made Jane and I her matrons of honour! At the end of the signing, the three of us sneaked off to The Slug and Lettuce to share a bottle of wine and lots of writerly gossip.  It was great fun, and I think I had more than my fair share of the wine (as usual!), my excuse being that Sally had to stay reasonably sober to host her launch party and do her speech/reading later. 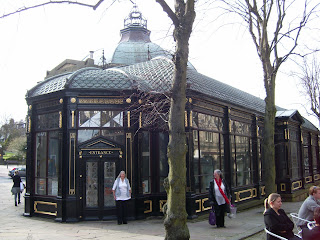 We arrived at The Pump Rooms in plenty of time, but the doors were locked. Trust Sally to be the first author to be locked out of her own launch party! We must have walked round and round that building several times being overwhelmed by the smell of rotten eggs as we did so. (It was the sulphur from the well, for those who don’t know Harrogate too well.)
Sally’s delightful publicists had done her proud with copious amounts of wine and a delicious buffet. It was great to meet and chat to members of her family and friends I’d not met before, as well as other writers, some of whom I’d happily chatted to on Facebook but not met in person. I even met a writer whose story I’d shortlisted in a recent Yellow Room competition (Linda Priestley). We had a fascinating discussion about crime writing and the police forum she belongs to. 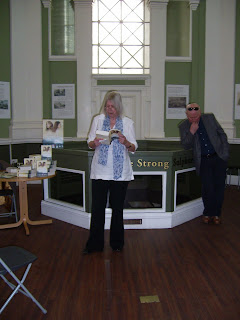 Despite her shyness, Sally did a wonderful job of reading from Hope Against Hope,  which made us all eager to rush off and start reading it for ourselves.
Just like the best weddings I’ve been to, it was all over far too quickly and before 8pm I was trudging back up the hill to my hotel, Sally having been whisked off by her husband, Jon, not to their honeymoon suite, but to The York Festival of Writing.
I spent most of the rest of the night reading Hope Against Hope, unable to sleep due to noisy revellers in the street outside and inside the hotel itself! Still, I wasn’t complaining. If, like me, you loved reading the likes of Penmarric and A Woman of Substance when you were a teenager, then Hope Against Hope is for you. Pure escapism and a historical setting. As you would expect from Sally, her novel is beautifully written and meticulously researched. Perfect. I haven’t enjoyed a book as much as this in ages! Well done, Sally. The girl did good.
Posted by Jo at 12:06 5 comments: 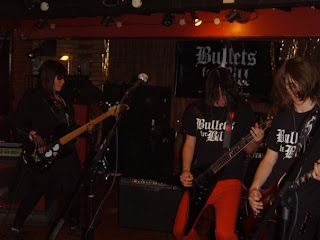 Most of you know that my son, Matt (14) is in a rock band called Bullets For Bill. They are a five piece band, Beffy Reeder on vocals (not pictured), Ell'e Chambers on bass, Brady Deeprose (guitar.. wearing red trousers here), Matt Good (guitar) and Louis Walford on drums. Now I know I'm biased, but they're all very talented kids and lovely with it. They're building up a huge following in the local area and have played many gigs over the last twelve months. They smashed into the Top Ten in the Rugby's Got Talent competition (everyone at the radio station loved their entry, My Cure, written by Matt) and today their song was played twice on Rugby FM radio. I was shaking with excitement when I heard it. I'm so proud of them all. You can listen to their entry on the Rugby FM website: http://www.rugbyfm.co.uk/rugbys-got-talent-180799 Their entry is No.3 (Bullets For Bill - My Cure). Listeners vote for their favourite entry from Friday 16th April at 10am. It would be great if you could vote for Matt's band! The top five will then play on a stage in Whitehall Recreation Ground on Monday 3rd May to, hopefully, a large crowd, who'll be gathered there for a charity fun day.
Posted by Jo at 02:51 2 comments: