Twycross Zoo and A Mountain of Ironing! 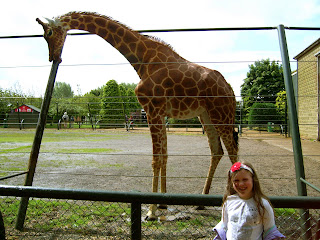 I've just got time for a quick post before we head off on holiday this afternoon. We're staying overnight tonight in Kendal (M6 on a Friday afternoon.. are we mad?), then travelling on to Muasdale in Kintyre tomorrow. I hope the weather stays fine. There's nothing worse than travelling in the rain. 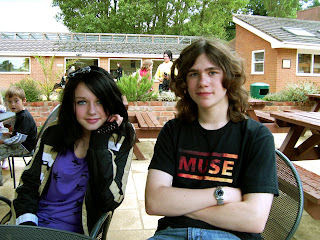 Talking of rain.... we braved the weather and ventured forth to Twycross Zoo on Tuesday. It's a trip we make at least once a year and brings back fond memories for me, as I used to live about seven miles from there. Matthew was meeting a girl he'd met on the Internet via the home educated children's message board. He looked pale and nervous as we splashed our way down the A5 and A444. I'm pleased to say they got on like a house on fire. Could this be girlfriend Number 2? Her mother was also lovely. We left the 'lovebirds' to wander round on their own. Megan was busy drawing animals in her notebook, no doubt storing up information for when she's a qualified vet (yes, I know she's only 6, but you have start somewhere). 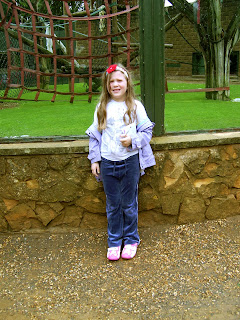 For the rest of the week I've been doing load after load of washing, telling everyone that if they wanted something washing for the holiday now was the time to add it to the load. Last night at 10pm my dear husband complained that his 'chilling out shorts' were getting a bit 'cheesy' and did I know where his spare ones were. Aargh!!

Thank goodness for Ipods. I'd never get through the ironing without it!

Finally, I have two more stories to proofread before emailing the first issue of The Yellow Room to the typesetter later this morning (better get cracking!). I can't see it being ready to mail out before October, however. These things take time, as Morrissey once sang.
Posted by Jo at 02:04 No comments:

Is it just me or does anyone else feel lazy and lethargic during July and August? Come September and I feel reinvigorated.

I haven't been doing a great deal. The children have taken over and I don't seem to have the energy for anything else (apart from a few long walks last week). I haven't been to the gym in nearly two weeks and feel very out of shape. My wine consumption has also increased from one glass per night to two. Can I blame the school holidays for my lethargy? I have been reading a lot, however, and have now purchased all eight of the Richard and Judy Summer Reads. It has been the only project I've felt capable of completing.

I still have a pile of The Yellow Room submissions to read. I'm still proofreading the first issue of the magazine, but hope to be able to send it off to Andy Cox for typesetting before I go on holiday on Friday. All I can do is apologise for my tardiness.

We're off to Kintyre on Friday for a week, with an overnight stay in Kendal to break up the journey. All I've heard all weekend from various friends and acquaintances has been, 'Be prepared for lots of rain. You don't get much sun up there. It'll be cold, you know. Take some jumpers.' Thanks! I hope to prove them all wrong and come back with a suntan! I'll be posting pictures here when I get back. Oh, and I won't be Paul McCartney spotting, as I've just discovered he's halfway through a month long road trip across Route 66 in the US. Damn!
Posted by Jo at 02:49 1 comment:

We've had a run of bad luck in the transport department in the past few days. It all began when Nige got 'stuck' in the centre of Coventry and found himself heading towards a bus lane kitted out with numerous cameras in a ploy to extract as much money as possible out of the unwitting motorist. He couldn't turn left or right and didn't want to reverse in case he ploughed into an oncoming, diesel-fume-belching bus. He came home ranting and is now waiting for a fine in the post. He swears he didn't see any warning signs (he was looking out especially) and sees it as entrapment. Call him paranoid. Or Jeremy Clarkson, whichever you prefer.

Yesterday I was ferrying children around to friend's houses, swimming lessons, the dreaded McDonald's (first time in over two years we've set foot in there!) etc, then sitting in the driver's seat once more to do another drop off and pickup, the car wouldn't start. After several attempts and knowing deep-down that I was wasting my time, I nipped in the house to call Nige for assistance. Fortunately (or not for him!) he'd just arrived home. He concluded within two minutes of fiddling that it was the fuel pump. How do men do that? I piled the children into my husband's car and continued the ferrying around in that (lucky he was home a bit earlier).
And how fortunate my car was on the drive at home when it decided not to start and not on the forecourt of McDonald's! How fortunate that it didn't wait another week or so, otherwise we'd have been stuck on the M6 on the way to Scotland. This is called positive thinking as opposed to my husband's mutterings which went along the lines of, 'These things usually come in threes,' and 'I worked those eight hours overtime last Saturday for nothing'.

So.. instead of going to the cinema today to see Kung Foo Panda, we're stuck at home. Megan has been very philosophical about it (must take after her mother!) and said, 'Never mind, Mummy, we can make the worm farm today instead!' I can't wait!
Posted by Jo at 00:23 No comments: