I discovered today that I wasn't the only one feeling in need of a 'spring clean' last week. A spring clean of the body and mind, that is (not much cleaning of any other sort gets done round here!). There's a brilliant post on Dietgirl's blog today describing the very same feelings I experienced on returning from my holiday. You can read it here. The comments are also very interesting. I'm definitely going to buy the two books she mentions: I Could Do Anything If Only I Knew What It Was and Refuse To Choose.

I have more of an idea in which direction I want to go now. I have to write a novel (or finish the one I'm working on). I am going to write more articles. I want to run creative writing courses. I love editing The Yellow Room and that is a must. I love helping others with their writing and getting their work in print. I love running and want to achieve greater distances each week. I love playing the piano and being a mum. I like to be autonomous and don't like conventional jobs where someone else tells me what to do. I refuse to conform! I keep thinking about my late grandmother's advice, 'To thine own self be true'.

I've bored everyone silly on the various forums I belong to this week, blathering on about my 'great' running achievement on Monday evening. I ran 5 miles round the local reservoir (without stopping!!) while my son was kayaking on the water. The last mile or so was quite hard going. I managed to run it in about an hour (just under). Matthew's physics teacher was also running round and he did it in 37 minutes. Yes, well. . . I just love the euphoric feeling after a run.

I played a fair bit of piano yesterday. I've been trying to master Albert W. Ketelbey's In A Persian Market. It's quite a long piece and I remember my dear departed mother playing it so well when I was a child. I'm very pleased with my progress. A few weeks ago I was trying to work out where the notes were and now I can play it reasonably fluently. I bet the neighbours are sick of hearing it. I keep waiting for one of them to knock on the door and complain.

It occurred to me while playing the piano that it is much more satisfying than writing in that you're not trying to please anyone but yourself. The same with running. I get a great sense of achievement out of both things. I'm doing something physical and there is an end result. Why don't I feel like that about writing? Surely I should? It's as if I have this constant need for approval. I get applauded for my running. I can see a tangible improvement week on week. Not so with writing. No one hears me play piano and I play purely for my own pleasure. Again I see an improvement week on week. There is evidence of progress. The same can't be said of my writing. Some people read the short stories I write, yet if they don't get published or don't win any prizes, then I think, 'What's the point? I'm getting nowhere.' Strange, isn't it? I can't understand why I don't apply the same positive attitude to my writing as I do to my other activities.

I've already sold just over half the copies of The Yellow Room Issue 2 - only a week after it was published. I'm now waiting to hear what the readers thought of the stories this time.

I've been thinking hard this week about what makes a good short story. I keep coming back to A Bolt From The Blue by Helen Marcus, which won the QWF 10th Anniversary Competition and was published in Issue 45. It is one of those stories which resonate. The striking image of the deep pink red bolt of cloth 'leaning against the door of the house across the road, like a drunk waiting to be let in' has stayed with me all this time. It's a great title, too. I'm trying to get in touch with Helen to ask her permission to reprint the story on The Yellow Room website. 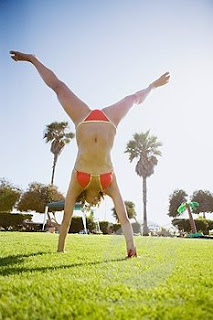 After my crisis of confidence earlier in the week I'm pleased to report that I'm now feeling much more positive. It's amazing how the support of friends can make you feel so much better. That's the beauty of blogging, I guess.

My running is going very well. On the advice of a couple of running friends I decided to go out yesterday and just run for as long as I could. I managed to do 4.5 miles without stopping. Whoopee! I felt fantastic afterwards.

A more surprising achievement yesterday was being able to do a handstand... the first time I've done that in over 30 years! Megan was getting frustrated that she couldn't do them, so I thought I'd have a go at showing her. I amazed myself. Not bad for a 46 year old! I hasten to add that I don't look anything like the girl in the photo.

There's good news, too, on the writing front. I'm excited about my novel again. I did some work on it on Wednesday and feel motivated to continue with it. I've already written about 50,000 words, so I am committed. Perhaps I should try to finish it by the end of the year.

Almost all the subscribers' copies of The Yellow Room Magazine Issue 2 have been sent out now. Just the contributors' copies to go. I've updated The Yellow Room website and just need to update the links page. I'd better get on with that now.
Posted by Jo at 01:26 5 comments:

Yesterday I took delivery of Issue 2 of The Yellow Room Magazine. It will be posted out to subscribers before the end of the week. If you don't subscribe and fancy taking a look, then please send a cheque for £5.50 made payable to J M Derrick, 1 Blake Close, Bilton, Rugby CV22 7LJ or you can visit the website (www.theyellowroom-magazine.co.uk) and pay online. I have just one copy of Issue 1 left.

We had a lovely relaxing time in Suffolk and were so lucky with the weather. It was warm, sunny and dry all week. It was so good to have time away to take a long, hard look at 'my life', which sounds very deep and meaningful. I think I'm going through a mid-life crisis. I feel as if I'm at a crossroads and don't know which road to take. I'm having serious doubts about my ability as a writer and wonder if writing is what I really want to do. I love editing the magazine, so that is something I will continue to do. However, I'm not sure I have the talent, motivation or the staying power to be a real writer. I find it all so demoralising. There are so many brilliant writers out there and getting published is so damn hard! Do I want it enough to persevere? I'm not sure that I do.

It worries me that I have no driving ambition to do or be anything in particular. I think I'm rapidly turning into my mother who was happy to stay at home, do housework (okay, maybe not exactly like her) and read/do puzzles. What's wrong with me? Aaargh......
Posted by Jo at 01:40 7 comments:

I was rather surprised to see the latest quote from Biddles, the company who print The Yellow Room Magazine. It was £50 dearer than last time and for the same number of copies, same specifications etc. Apparently, the cost of paper has gone up.

Yesterday I went to the post office to send someone a copy of Issue 1 of The Yellow Room and discovered that the cost of sending the magazine second class post has risen by 10p to 76p. Therefore, the cost of each magazine has risen by 60p. I haven't yet passed on this increase to subscribers, but I may have to later in the year.

The good news is that Issue 2 of The Yellow Room is being printed and will be sent out to subscribers on 24th April.