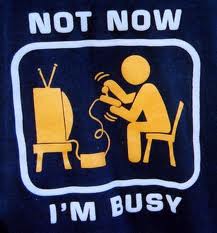 This week I've been frantically trying to get the final draft of my novel finished. There have been several moments of panic, which totally block me. There have been times when I've had to walk away from the computer and do something else. Those times are much more productive, as a solution to a structural problem will suddenly present itself. Getting the structure right is crucial, if you're going to write a successful crime novel, I feel, which is why I've been fiddling around with scene order for what seems like weeks. I've written scenes in, taken old scenes out and juggled around with the order so many times. Thank goodness for Scrivener, which makes the task so much easier.

I am working to a strict deadline now. We go on a family holiday to Llandysul in Ceredigion, Wales on Saturday. I don't have a laptop and there won't be any Internet access. I'm going to download my novel onto my Kindle before we leave and read it through as if it were a published book. I'll also be making notes. It should then be ready to submit when I get back.

I wanted to get The Yellow Room Issue 7 off to the typesetter before I went away, but the novel has had to take priority. I'm still in dispute with Biddles over the print quality of the last issue, so Issue 7 could be delayed for some time. We're still in the process of judging The Yellow Room Competition. We've read just over half now. My friend, Sarah Green, kindly read half of the entries.

I'm also in the process of collating some of my short stories to enter in The Scott Prize. Some of the published stories are quite old, and it's interesting to see how much my style has changed over the past ten years or so. I tend to go for very different themes now, too.

I do have one success to report this week. I came 2nd in the Write-Invite competition for the second time. Sadly, there isn't a prize, but it gives my confidence a big boost, and I love entering the competition. It makes me write something new every week and it has taught me how to finish a piece to a deadline. I used to be rubbish at endings.

Which reminds me, I still haven't written the very last line of my novel. I wonder what it will be?
Posted by Jo at 08:42 3 comments:

There's no doubt about it, having a daily word count target is motivating. About the only thing that does motivate me. However, there are days like yesterday when it's just not possible for any number of reasons.

I was on a roll on Sunday and managed my 2,000 words, then my son got ill. This involved a trip to A&E on Sunday night and a visit to his GP early yesterday morning. Then Matt decided he felt well enough to go back to school yesterday lunchtime, so another trip into town, as I didn't feel he was up to cycling in. And then, of course, I had to pick him up again, as well as my daughter. Then he had a singing lesson and I had to take him there. After cooking tea for everyone, I then had a hygienist's appointment at the dentist twelve miles away. Oh, and I forgot to mention my run and a few domestic chores thrown in. I did manage a few hundred words, however, which is better than none at all.

Today I have hours stretching ahead of me with no plans or duties until school pick-up time. And what am I doing? Bashing out those 2,000 words? No.... I'm mindlessly browsing the Internet (blogs, Forums etc) and writing this blog. I also have to proofread the next batch of stories for The Yellow Room Issue 7 and read a few competition entries.

Don't get me wrong, I love being busy, but I find adding to the word count a real slog. Is it just me?

I've signed up for this year's NaNoWriMo to practise getting the words down as quickly as possible. I struggle with the concept of quantity over quality. I know the quality comes in the rewriting and editing process (the part I love best) and without the words on the page, editing and rewriting is impossible. However, I still struggle like mad to get a first draft finished. Please tell me I'm not the only one!
Posted by Jo at 02:11 12 comments: 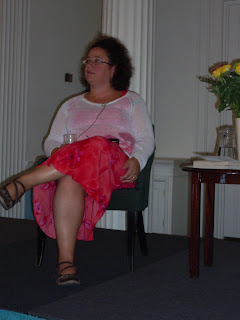 It's funny how things turn out. Yesterday, instead of running a half marathon in Coventry as planned, I was sitting in a rather elegant room in The George Hotel in Lichfield listening to Sophie Hannah talk about her new novel, Lasting Damage. I hope there won't be any lasting damage to my foot, after the marathon training in the summer. The injury meant that I had to defer my entry for The Coventry Half Marathon until next year.

This was Sophie's third visit to the Lichfield Festival and we were told she'd driven from Cambridge that morning. Sophie told us she was going to give us 'the gossip behind the book', her sixth psychological novel. Her first, Little Face, was published in 2006.

The idea for Lasting Damage came to Sophie in early 2009 when she was in the process of trying to move house from West Yorkshire to Cambridge. She'd been Fellow Commoner In Creative Arts at Cambridge University some time before and had fallen in love with the city. The reason for her move to West Yorkshire was her husband's job, which he was all too happy to give up, now that Sophie's writing career had taken off.

In the process of looking at houses for sale in the Cambridge area, Sophie became hooked on the Right Move website and knew the floor plans for every house for sale in Cambridgeshire. She even got dinner party guests to challenge her to match any floor plan with the property in question. It was because of her addiction to property websites that the idea for Lasting Damage came about.

Lying in bed at 1.30am, waiting for her husband to fall asleep, Sophie had the uneasy feeling that something was wrong. She realised she hadn't looked at the Right Move website in the last 24 hours and a new property might have been listed. There was no time to lose! She might miss the house of her dreams. Careful not to wake her husband, she crept down to the office in the dark and opened up the laptop. Her heart was racing. It was like sneaking off to chat to a secret lover on a social network site. Sophie was well aware that her slightly mad compulsion would make an excellent beginning for a novel. Obviously, her character would need a better reason for behaving this way.

Connie, as her character became known, has been stalking a particular house for some time. The reader doesn't know why. In the middle of looking through the virtual tour of 11 Bentley Grove, Connie sees a dead woman lying in a pool of blood in the lounge. She rushes to wake her husband, Kit, but when he looks at the virtual tour, which has been playing in a loop, there is no dead body. Kit doesn't believe Connie saw it. There is no evidence to suggest there was a dead woman on the website and when Connie contacts the police, they don't believe her either.

Sophie said it took her six months from the initial idea to work out exactly what was going on and how the photo of the dead woman got to be on the website for the few seconds that Connie was looking at it. She said she was determined to make the plot work and one day the whole story came to her. I must admit I was intrigued, so downloaded the novel onto my Kindle. In the meantime, I decided I'd try and work it out for myself and then go back to read the novel to see if I was right!

Of all the novels she's written, Sophie said she enjoyed writing this one the most, as she loves houses. Sophie found a house in Cambridge eventually and now lives there, but she still looks at the Right Move website most days. She justifies her addiction by saying that it's research. She even had to put an estate agent's floor plan at the beginning of Lasting Damage. It is the floor plan of a real house that was for sale, and she says she's waiting for the owner to read her book and recognise it and for them to email her. She promised that if this happened, she'd give the owner of the house signed copies of all her books.

I found it interesting when Sophie spoke about the theme of this book and of all her books - that the biggest threat to someone's sanity and/or safety comes from someone close to them. According to psychiatrists, 99% of the extremely disturbed people they see, are like that as a result of the behaviour of someone close to them. Connie's lasting damage is a result of her psychologically nightmarish parents.

Sophie told us that her publishers deliberately didn't market her first novel as crime. There wasn't a black cover; the title wasn't typical of a crime novel title. Sophie likes to think of her books as more literary than traditional crime, yet believes she is the same type of writer as Agatha Christie, because she has the ability to tell a good story. She admires Christie for her 'brilliant plots' and says, like Christie, that she is 'desperate to find out' what happens in an 'apparently impossible scenario'. Sophie derided the traditional formulaic crime novel. However, her novels follow a set structure. She has a female viewpoint character who is 'having a terrible time' and uses first person present for her heroine. She uses third person viewpoint for her 'police procedural' scenes.

One of Sophie's detectives, bullying Inspector Proust, is based entirely on a real person whom she doesn't like very much. She quotes this person's dialogue directly onto the page, but isn't afraid that he will read her books, as he doesn't like crime.

I asked Sophie whether she started writing while mulling over her plot. No, she said, once she had the plot worked out, she wrote a plan and stuck to it. She has to be in control of her characters and that writing for her isn't necessarily an organic process. I think this shows in her rather clipped and spare writing style. From what I've read so far, I feel her novels lack depth and atmosphere. However, that is personal preference and I know some readers enjoy racing ahead to find out what happens, rather than luxuriating in wonderful writing and characters you fall in love with.

It was interesting to hear how a fellow crime writer works. I've now learned that it's a case of 'each to their own' and that there isn't a right way or a wrong way of approaching the novel. We each have to work out what is the best way for us; mostly by trial and error. I no longer try to copy another writer's methods and finally have faith that my way will get me there in the end.

I had a wonderfully enjoyable hour after the talk, walking around Lichfield, which I used to visit regularly when I lived in the area nearly fifteen years ago. It brought back some lovely memories and it was interesting to see how much the city had changed in that time. It's well worth a visit.
Posted by Jo at 02:19 2 comments: