The Reading Festival of Crime Writing... A Riddle Of Maggots 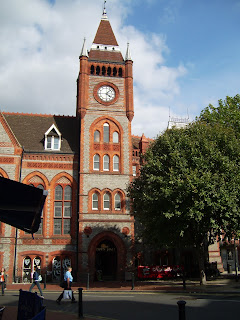 On Saturday morning I attended a talk by Ken Wells, curator of the Thames Valley Police Museum and ex-scene of crime officer for Thames Valley. He had recently appeared on TV in a programme presented by Martine Cole about Amelia Dyer, the baby farmer who murdered children in her care.

Today Ken told us about a case in the 1960s when a virtually decomposed body was found in the woods in Bracknell and how the police went about establishing the time of death.

There are four main points which usually determine time of death: body temperature (drops 1 degree for each hour after death); rigor mortis (starts at the top of the body and works down until the body is in full rigor in around 12 hours); lividity (the areas of the body touching the ground leaving marks on the skin) and finally the degree of decomposition.

Ken used The Lydney Murder as an example of how the time of death was established. Two young boys had found a body in the woods and raced to a local police station where the desk sergeant found it hard to believe their story. However, the boys seemed genuinely distressed, so officers were sent to the woods to investigate. Once there, they discovered a decomposing body covered in maggots. In fact, there were so many maggots covering the corpse, it looked as if it were moving. The officers who were first on the scene judged from the state of the corpse that it had been there between three and six months.

Ken Wells, who was the scene of crime officer at that time, began quartering the area (sectioning the area around the body into quarters) and taking photographs. When it is uncertain when death occurred, as in this case, the home office pathologist from Guys Hospital attends the crime scene. The pathologist in question, Professor Keith Simpson, had written a lot of books on forensics. Another forensic expert, Professor David Bowen, was also asked to look at corpse to try and help establish a time of death. The police were asked to collect the maggots on the body for examination.

Professor Keith Simpson, on studying the maggots, declared that the body had been there no longer than twelve days and probably had been killed nine to ten days earlier. The maggots that had been collected were in the third stage of insta just before entering the pupa formation stage. It was estimated that the date of death was probably 16th or 17th June.

It was established that death was caused by a single blow to the throat. There was also a beech leaf on the body and there were no beech trees in Bracknell Wood, the area where the body was found. Fingerprints from one hand (the ring finger and the forefinger) were retrieved, then police went about trawling through the missing persons file at Scotland Yard to try and ascertain who the victim was.

It turned out that the body did have a police record and was Peter Thomas. He lived in Lydney, Gloucestershire and he had been reported missing on 16th June.

Police, on searching Peter Thomas’s house, found some correspondence which linked him to a William Brittle. It seems that the deceased had inherited £5000. Brittle wanted to start a new business venture and advertised in the local paper for investors. Thomas decided to loan Brittle £2000, against advice from friends and family, stating that this sum must be paid back to him on 16th June.

William Brittle’s car was examined. There was no blood, no hairs, but there were several beech leaves in the boot. Brittle was questioned and he claimed he received the £2000 from gambling, but there was no evidence to that effect from any bookmakers. The police also discovered that Brittle was an expert in karate, so would know how to deliver an effective blow to the throat which would result in death. He was charged with murder.

After four months of gathering evidence, witnesses came forward claiming to have seen Peter Thomas at Gloucester station on 20th June. Did that mean that Peter Thomas had only been dead 8 days when his body was found? Professor Keith Simpson was consulted and said that the maggots couldn’t be there for a shorter period than he’d originally stated, as they then wouldn’t be in the final insta. The defence decided to bring in an entomologist who confirmed what Simpson said.

William Brittle had a motive for murder in that he owed Peter Thomas £2000 and had no funds to repay the loan.

Now three witnesses were saying they saw Thomas on 20th June. Would these witnesses convince the jury more than Simpson’s evidence? Could it be that the witnesses had a memory lapse? This was a clearly a case of hard physical evidence versus human error.

The jury took just three and a half hours to convict Brittle. Professor Keith Simpson’s evidence was irrefutable.

I guess the moral of the tale is: Don’t lend money to strangers, particularly those who are expert in karate!

Ken Wells, as well as curator at Thames Valley Police Museum, does common approach path lectures to PCSOs (Community Support Officers) at the police college in Hendon. He is certainly an entertaining speaker, and there was a great deal of humorous banter between him and the audience. I, for one, will look out for Ken at writing festivals in the future, as I would like to hear him speak about more of the cases he worked on.

Fascinating. I am not a wannabe crime writer but love programmes like Waking the Dead, so very interesting to hear it from the horse's mouth - so to speak.

Fascinatingly gruesome, Jo! With regard to this set of posts on crime writing and forensic detail, I've read Mo Hayder - my favourite is Tokyo - and loads of Tess Gerritsen. I went to a talk she gave in Oxford last year, and she was just lovely. It fascinates me that women often seem to have stronger stomachs when it comes to this sort of material than some men!