This was my third visit to The Harrogate Crime Writers’ Festival. The first time I went to the festival was in 2005 when it was held at The Cedar Court Hotel. Coincidentally, Ruth Rendell was the first speaker I saw that year, too. The second time I attended was in 2006,  and the festival had moved to The Old Swan. The first speaker I saw that year was Kate Atkinson, whose talk was also one of the highlights this year.
My constant companion at all three festivals was Sally (I Used To Live In Harrogate) Zigmond (previously known as That Sally Bloody Zigmond, as she used to win every short story competition going). This was the first year we’d stayed at a hotel for the Crime Writers’ Festival (as Sally used to live in Harrogate, you know and she kindly put me up in her lovely home in previous years) and bought a Weekend Rover Ticket and oh, how much more we got out of the event as a result. We stayed at The Cairn (more of which later). Oh, and before I continue, please don’t think I’m being rude to Sally. We’re at that stage in our friendship where we can say what we like to each other without causing offence (a bit like Ruth Rendell/Jeanette Winterson and Val McDermid/Sue Black, if I dare compare myself to such literary greats).

We both arrived in Harrogate on Thursday and naturally aimed straight for the bar at The Cairn and my first Theakston’s of the weekend. From there we made our way to The Old Swan to pick up our goody bags, groaning with free books, which we then had to lug around for the rest of the evening. We were delighted that Denise Mina won the Crime Novel of the Year Award with her ‘really hard won book’ Gods and Beasts, particularly as she was the only female on the shortlist. At the opening party Sally and I stood on the periphery, sipping our pints of Old Peculier and we were just wondering whether we’d ever see anyone we knew, when a pretty blonde lady peered at me with interest and then approached and tentatively asked, ‘Are you Jo Derrick?’. She looked vaguely familiar, so I was thrilled to discover it was none other than Susannah Rickards (winner of The Scott Prize in 2010 with Hot Kitchen Snow http://www.amazon.co.uk/Susannah-Rickards/e/B00466TWYO), whose work I’d first published in Quality Women’s Fiction some years previously and more recently in The Yellow Room. It transpires that Susannah has written a crime novel and secured a well-known agent who stood just feet away from us (the formidable looking Jane Gregory). It was wonderful to meet Susannah and I lost count of the number of times I bumped into her over the weekend. We ended up spending rather a lot of time together drinking wine and discussing writing in the next three days, which was brilliant. I’m pleased to say we got on like a house on fire! 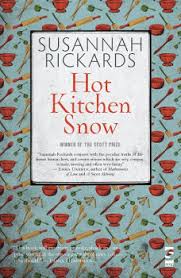 On Friday we awoke to another fabulous day weather-wise and excited about seeing one of our literary heroines, Jeanette Winterson interview Ruth Rendell (or Baroness Rendell Of Babergh CBE, as she is otherwise known). It was heart-warming to witness their wonderfully intimate relationship as they shared a fair amount of banter and leg-pulling. I got the impression that Jeanette saw Ruth as something of a mother-figure. She began by telling us how Ruth first gave her refuge in the 1980s when Jeanette needed space to write her second novel, then proceeded to ask Ruth about her writing, which spans a total of fifty years. I did feel rather queasy when the discussion turned to female genital mutilation, a practice which Baroness Rendell is fighting hard to put an end to. All in all, it was a great start to the festival, making me want to revisit the Barbara Vine (the pseudonym Ruth Rendell uses for her psychological crime thrillers) novels in particular.
Now I apologise for not bringing you an in-depth account of each of the talks, interviews and panels, but I didn’t take notes! Unforgivable really, especially as I had my notebook in my handbag. I promise to do better next time. My memory isn’t what it was, so I can only bring you a scanty overview. I confess I find panels rather trying, as opinions and insights are batted backwards and forwards between the authors taking part. The heat in the ballroom at The Old Swan was unbearable at times, particularly in the afternoons when temperatures hovered around the 30 degrees centigrade mark and an audience of a few hundred people were crammed in like sardines! This became The Festival of the Fan, as I’ve never seen so many hand-held fans being wafted in one room before. It was like something out of a regency novel. Even the panelists were using them, which created a bizarre Apocalypse Now soundtrack to the proceedings as their microphones picked up the gentle thwack-thwack fanning movement. 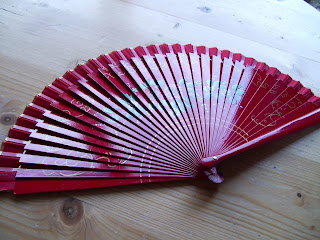 Sally and I attended a fascinating dissection of Victorian Crime with Kate Colquhoun, Lyndsay Faye, Kate Summerscale and Andrew Taylor. Old Sherlock Holmes has a lot to answer for, as one particular panelist dominated the proceedings. We opted out of Social Media: Who Are You? choosing to sit in the bar with a bottle of Chilean Sauvignon Blanc instead. This was a double-edged sword, as we were ‘treated’ to a discourse on crime authors with a gregarious Glaswegian with a fine line in blagging a ticket for Lee Child. As with most of the Harrogate delegates we met, the gentleman asked where we were from, prompting Sally to stress that she used to live in Harrogate and I was told, for the first time in my life, that I had a ‘neutral’ accent.
We listened to diverse opinions on the nature of evil in the Touching Evil panel with Michael Ridpath, Belinda Bauer, Nicci French, Alex Marwood and Stav Sherez. I came away grateful that a) I wasn’t married to Sean French, b) annoyed at Michael Ridpath’s casual misogyny and c) vowing to read the novels of Belinda Bauer and Alex Marwood.
Sally had had enough at this point and said she needed an early night. I think this was simply an excuse to escape me blathering on any more about my crime novel (that I still haven’t finished) and moaning about the bar prices. I took the opportunity to dash back to my room to change into yet another maxi dress (I resembled a magician pulling them out of a hat like rabbits) before setting out in search of a meal. On the way back down the hill towards town I met Susannah Rickards and her newly-made friend Lauren Sarno. They kindly invited me to join them for dinner, so I accompanied them back to their hotel, The Majestic where I waited in the beautiful foyer for them to freshen up. I was just cursing the organisers of the festival for dumping me in the inferior Cairn Hotel, when Susannah and Lauren reappeared with two more Festival delegates in tow; Cath Bore, whom I’d met earlier - we are ‘Friends’ on Facebook - and who instilled serious maxi dress envy in me when she appeared wearing a stunning purple one; and Katie, a prolific crime novel reader.
There were murmurs of Wagamama’s, which piqued my interest, never having eaten there before, but we found ourselves lured into a rather mediocre bar and grill where I was presented with chicken, which had been cooked under a brick (!) and a few thick chips. (I can’t believe that a restaurant in this day and age presents food minus at least a few peas and some greenery.) We rashly ordered two bottles of wine, which was a bit much considering we had to be at another talk by 8.30pm, but I manned up and finished it off for them. It was the least I could do.
Sally Zigmond and I had been disappointed that Susan Hill had cancelled earlier in the week to be replaced by Peter James, but in hindsight I’m glad she did, if only to hear Val McDermid singing a rendition of Bonnie Tyler’s I Need A Hero (Val proved to have a pretty good voice!).
Peter James is a born raconteur. His background is fascinating (his mother was a Jewish refugee who came over to England in the late 1930s with ‘Jude’ stamped on her passport and a suitcase full of gloving leathers. She ended up being glove-maker to the Queen) and anyone who calls Martin Amis a tw*t is all right by me. Peter James was snubbed by Amis at a literary event in 2010, having known him when they went to the same ‘crammer’ in the 1960s. As revenge and following a bet with Ian Rankin on Twitter, Peter wrote Amis into his next book, giving him a very small penis. (Amis Smallbone is ridiculed by a prostitute, who compares his manhood to a stubby pencil. The gangster he is staying with says, “You’ve always traded on being your dad’s son, but you was never half the man he was.”) 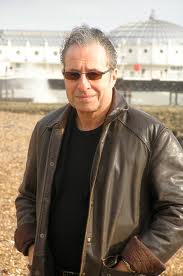 Some of you will know that Peter James’s books are set mostly in Brighton. He told the audience that Brighton is a magnet for criminals and is the drug-injecting capital of the UK (son’s girlfriend who has applied to Brighton Art College take note). I was particularly intrigued by the existence of ‘knocker boys’ who dupe pensioners into selling their heirlooms for a fraction of their value.
Lots of laughs later, I headed back to The Cairn and was greeted by a particularly bad ‘pub singer’ in the foyer doing a poor rendition of Islands In The Stream and a middle-aged lady dancing alone while her husband looked on lasciviously. I just hoped my room wasn’t next to theirs. I got as far away from the ‘entertainment’ as possible and ordered a glass of wine while swapping ‘Gromit’ expressions with a Scottish lady who obviously had escaped the foyer seating area for similar reasons. I was then joined by two lovely Swedish librarians who I’d met in the lunch queue at The Old Swan earlier in the day and we proceeded to talk books and Britain.
This blog is going to have to be at least a two-parter! More tomorrow!
Posted by Jo at 08:47

Great write up! I feel the need to come to next year's festival.

Smashing write-up, Jo. I especially liked the bit about the swishing fans. I'd have been okay there and wouldn't have stood out as A Woman of a Certain Age having A Hot Flush, like I normally do. :-)

Fabulous account, Jo. I'm already looking forward to part two. I loved the swishing fans and the dancing woman - what a brilliant snapshot of hotel life. And how well you did to fit in all of that activity and socialising in this searing heat. Like Sally, I would have had to retire early too! xx

It sounds like a great festival and makes me want to take part. Maybe next year.

I was grinning to myself as I read about Peter James. I'm a fan of his work and I've read all the Roy Grace series. I had no idea about the Amis reference but I do remember that scene.

Putting my physicist's hat on, I have to say that fan-swishing will merely result in heating up the room. Okay, now my hat is on, I'll get my coat as well…

Your write-up put me right back there, Jo, thanks! I'd encourage anyone who enjoyed your blog to attend -- it's so rare that an event lives up to expectations. I'd expected to listen to my favourite authors speak, maybe meet one or two of them and perhaps make a new friend or two. All of that happened, except the friend or two turned into five or six -- I'm so glad you were one of them!