The Reading Festival of Crime Writing... The Best of the Rest. 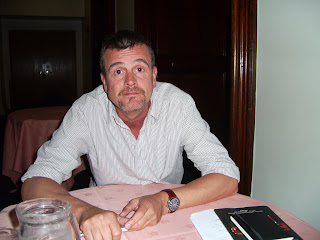 Mark Billingham and Christopher Brookmyre gave a talk on Saturday evening. This was the one I'd been waiting for and Mark was one of the reasons I booked tickets for Reading in the first place. Mark's crime novels, featuring DI Thorne, have won several awards including the coveted Theakston's Old Peculiar Crime Novel of the Year Award. Mark has also been nominated for five CWA daggers.

There’s no doubt that Mark Billingham started out as an actor and stand-up comedian before he became a writer. He had the audience in the palm of his hand from the off. Maybe with the exception of the man in the front row, who Mark picked on, saying he was going to quiz him on FA Cup Winners in the last 20 years. The poor man walked out after ten minutes, obviously not a football fan. Mark opened by talking about the best heckles he’d ever received. Or heard. At first, I felt Chris Brookmyre was in Mark’s shadow, but I needn’t have worried. Chris is a tough Glaswegian with great comic timing and who leaves you in no doubt he can look after himself.

Once Mark had dispensed with the comedy routine, he informed us that there was going to be a TV adaptation of his first two DI Thorne novels, Sleepy Head and Scaredy Cat. The actor, David Morrissey, is to play DI Thorne.

I questioned Mark’s wisdom in reading out emails from readers who have complained about bad language in his books. I was nervous that at least one of them might have been in the audience and would give him the best heckle ever. It could have been embarrassing, but apart from a few titters, the audience was silent. Christopher, who, as well as Mark Billingham, has written for BBC TV, explained that a writer is only allowed fifteen 'fucks' ie. only able to use the word 'fuck' fifteen times in an entire script (not easy for a drama set in Glasgow!). So frustrated was Chris at this, he asked if he could borrow some 'fucks' from a someone who wrote costume dramas and didn't need as many.

Both Mark Billingham and Christopher Brookmyre read from their new novels. Chris was a journalist before becoming a full time novelist. He is the winner of the 2007 Glenfiddich Spirit of Scotland Award, and his novel, All Fun and Games Until Somebody Loses An Eye won the 2006 Bollinger Everyman Wodehouse Award for Comic Fiction. I’m surprised it wasn’t an award for the novel with the longest title.

I enjoyed Chris Brookmyre’s Glaswegian accent. Most of the scene he read was in dialect and about a gang of teenage schoolboys on a bus talking about the girls they’d like to shag. It sounded so authentic, I could have been sitting on a bus to Glasgow Central. The scene evoked a laddish atmosphere with lots of swearing (Mark Billingham readers take note) and lots of mentions of Big Soapy Tits Magazine (made up title??).

I had the honour of sitting next to author, Patrick Lennon, during this talk. He was very charming and struck up a conversation before going on stage to introduce Mark and Chris. Damn, I might just have to buy Patrick’s books, too (scroll down to read more on Patrick - Murder in Mind Panel Event blog entry).

If you get chance, do go and see Mark Billingham and/or Christopher Brookmyre in action. They’re both very entertaining. I was in stitches. In fact, too busy laughing to make many notes.

In contrast, I saw Kate Ellis on Sunday morning and almost walked out. Kate is the author of 13 books in the Wesley Peterson series and two in the Joe Plantagenet series. Kate has been twice nominated for the CWA Short Story Dagger, and her novel The Plague Maiden, was nominated for the Theakston’s Old Peculiar Crime Novel of the Year in 2005. 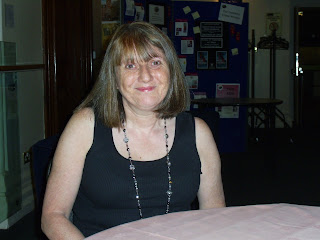 Kate came across as being a little ‘too nice’. Her talk wasn’t injected with a great deal of humour or charisma, I have to say. She failed to make her books sound interesting or intriguing enough. I haven’t read any of her novels, and just because she isn’t great at public speaking doesn’t mean they aren’t a good read, but she was there to sell them to me, and she didn’t. Kate said she likes to mix history with the present and writes about archaeology and legends. The present echoes the past in a lot of her books, which she sets mainly in Dartmouth and York. She says she changes the names of places, however, to allow her more freedom. She works with the same cast of characters for each book and they have become like old friends to her. Kate says she writes every day, even when she doesn’t feel like it. I should take note! 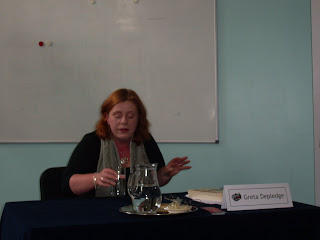 In the afternoon I attended another free event, Female Villains in 19th and 20th Century English Crime Fiction. This was more interesting than it sounds. Greta Depledge, a buxom red-head with oodles of personality, is a lecturer at Birkbeck College. She told us how English fiction is littered with badly behaving women. She discussed Wilkie Collins’ work, as well as that of Gladys Mitchell and Kate Summerscale, whose book, The Suspicions of Mr Whicher, reached bestseller status recently. Greta raised some interesting points about women’s murderous tendencies tying in with their monthly cycles (I can relate to that!) and about the menopause and the role hormones might play in driving women to the edge of madness (can definitely relate to that!). She also talked about hereditary madness and the old ‘born evil’ debate. She discussed how in the 19th century people believed in the power of physiognomy, the art of supposedly judging character from facial characteristics. A good example of this was when the famous photograph of Myra Hindley hit the headlines in the 1960s. She looked evil and because she was a women, her crimes were considered to be all the more heinous.

For me, the best talk of the Reading Festival of Crime Writing, had to be the final one I attended; Mo Hayder with Sergeant Randall from the South West Police Underwater Search Team. Mo’s first novel, Birdman, was an instant bestseller when published in 2000. Mo wanted to talk about how she researched her novels and Sergeant Randall is one of the experts she’s consulted for her more recent series of books, featuring DI Jack Caffrey, the first of which is Ritual.

Ritual opens with a description of Bushman’s Hole in the middle of the remote Kalahari desert in South Africa. This place exists and at approximately 270 metres deep is the third deepest submerged freshwater cave. Mo told us the true story of how two divers lost their lives there; the second diver, Dave Shaw, died trying to retrieve the body of the first, Deon Dryer, ten years after his death in the cave. 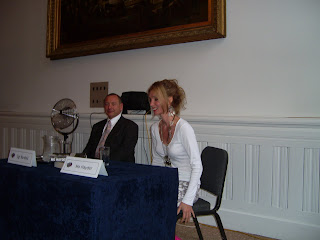 Mo explained the challenges of deep water diving in a very succinct and interesting way (I guess it helps that Mo is also very attractive to look at! Oh yes, and I coveted her luminous pink Dr Marten boots!). She told us that firstly there is the danger of getting trapped or lost. Secondly, divers are breathing deep-dive gas mixes - usually a combination of helium, nitrogen and oxygen known as trimix - at extreme underwater pressure, which can kill you in any number of ways. Then, at depth, oxygen can become toxic, and nitrogen acts like a narcotic - the deeper you go, the stupider you get. It can be compared to drinking on an empty stomach. Apparently, if you don’t breathe slowly and deeply, carbon dioxide can build up in your lungs and you’ll black out. Finally, decompression can cause all the nitrogen and helium that has been forced into your tissues under pressure to fizz into tiny bubbles, causing ‘the bends’, which can result in severe pain, paralysis and death. That is why extreme divers spend hours on ascent, sitting at targeted depths for carefully calculated periods of decompression to allow the gases to flush safely from their bodies. Once divers have reached the bottom of Bushman’s Hole, it can take 12 hours to come back up to the surface again. Imagine the boredom of waiting for hours at each decompression stage!

I found all this fascinating. Then Sergeant Randall told us the tragic story of a young couple who had lost their lives deep water diving in the West Country. It could have been the plot of a novel and certainly tugged at the heart-strings. He also told us that claustrophobia can be a big problem for divers. To test out potential police diver recruits they take them to an ordinary swimming pool in all the diving gear, but with a blacked out helmet, so they can't see a thing. This usually determines those who can cope with the feeling of claustrophobia and those who can't. Underwater search divers usually close their eyes on a search, as this also helps improve their sense of touch. I also learned that when a car goes into water at night, the headlights don't automatically go out. They stay on for as long as the car battery holds out, which can gives clues as to how long the car has been in the water.

I guess one of the things that came over during several of the talks and this one was no exception, was that the experts like Sergeant Randall and Ken Wells (see Riddle of Maggots blog entry) are only to keen to share their expertise with writers, no matter how novice a writer they may be. Novel writing is a steep learning curve in terms of writing technique, but it can be so educational, because you never know where your research is going to take you.

You should send me something for Horizon Review (Salt Publishing) sometime; the reviews editor is Nuala Ni Chonchuir, an Irish writer with an interesting blog, but all submissions of fiction go through me first.

Do you only write crime fiction, or are you versatile? Horizon is mainly lit fic. and poetry.

We don't pay though!

Hi Jane
I'd never heard of Horizon Review! I do write short stories and not crime! However, I haven't written a short story for ages... have mainly been working on the novel. Nuala had a story in the last issue of The Yellow Room, the magazine I publish.

Excellent reporting. Thank you for these.

Interesting article Jo. I wish I'd been there for more that weekend, but I think I have something exceeding simply 'flavour' after your report. Will take in more next year after this, as long as I can afford to do so! (Another job application rejection yesterday. Slim margins are great for confidence but no impact on bank balance...)