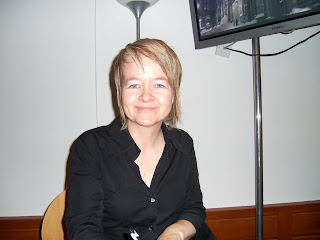 My friend, Sarah, was over the moon when she realised it was Andrew Davies who would be interviewing Sarah Waters at The Bridgehouse Theatre as part of the Warwick Words literary event. Andrew Davies adapted Sarah Waters’ first novel, Tipping The Velvet, for BBC television in 2002. He has adapted more classic works of literature including the 1995   television adaptation of Pride and Prejudice starring Colin Firth, and more recently in 2008, Charles Dickens’ Little Dorrit.

Andrew began by asking Sarah about her early life. Sarah’s father was an engineer and she explained that as a child she liked to make models with him. She also spent a lot of time reading, despite the fact that theirs wasn’t a ‘bookish’ family. She remembers being  influenced by The Silver Sword and The Phantom Tollbooth. Sarah was a huge Dr Who fan and read a lot of Dr Who novelisations and serialisations. She also loved ghost stories and liked to read the Pan Book of Horror Stories series, to which more literary writers like Elizabeth Taylor, Ray Bradbury and Elizabeth Bowen contributed.

Sarah reminded the audience that the accessibility of writers is a recent phenomena and that as a child she didn’t realise that writing was a job. She wanted to be an archaeologist. She also fancied working in the make-up department of a television company, as she loved making masks with lurid scars out of papier mache!

Sarah admitted to being a bit of a swot at school. Her stories were often read out in class, for example. In 1977 she remembers the family installing a stereo music centre complete with microphone into which she recorded her own talking book about killing her mother with an ashtray.

Sarah went from grammar school to study English Literature at university, then went onto to do a PhD in Lesbian/Gay Historical Fiction. She was thus inspired to write her first novel, Tipping The Velvet, as she said she had a very clear vision of gay life in the nineteenth century. She had no ambition to be a writer, even when writing Tipping The Velvet and didn’t have any intention of writing another book, but she got hooked. Sarah feels that Jeanette Winterson paved the way for lesbian fiction becoming more mainstream.

Andrew Davies thought that Tipping The Velvet was such a success because Nan is such a powerful character and we want what she wants. He attributed the success of the TV adaptation to The Sun newspaper, as the drama clashed with the football, so The Sun gave their readers the exact time you could turn over to Tipping The Velvet to catch the rude bits.

Sarah went on to write Affinity, which came out in 1999, followed by Fingersmith. Then she decided to change the era her books were set in to the post-Second World War period of the late 1940s. She says she liked the Brief Encounter-type image of that time.

Sarah’s latest novel, The Little Stranger is set between the years 1947 and 1948 in the county of Warwickshire. She confessed to feeling rather impertinent writing about the county when she knew very little about it. The Little Stranger is based on a fictional large Georgian house, Hundreds House, in the Bishop’s Itchington area. The house is falling apart, as there is very little money and just one servant. Going into ‘Service’ became very unfashionable after the war, as many of the men had gone off to fight and the women had left to do war work.

The Little Stranger is a haunted house novel in a similar vein to Henry James’ novel, The Turn of the Screw, a ghost story, reminiscent of the Victorian gothic tradition, which was made into a psychological horror film, The Others, in 2001 starring Nicole Kidman. Sarah said she thought M R James’ s stories were also inspiring, as they were clever, convincing and didn’t shock for the sake of it.

Both Affinity and Fingersmith are in the gothic tradition, of course, with psychological resonances. Sarah believes all the best gothic novels, like Dracula, were written in Victorian times. Dickens’ work was also an influence on Sarah (Great Expectations is one of her favourite books). There is a nod to Great Expectations in The Little Stranger, as the clock in story has stopped at twenty to nine, just like Miss Haversham’s (the exact time she was jilted).

Andrew Davies said The Little Stranger reminded him of Brideshead Revisited in that the peasant boy gets access to ‘the castle’. It was also reminiscent of Sleeping Beauty, he thought.

Sarah said when researching the post-war period she read the comedies of Angela Thirkle and told us they had a snobbish tone to them. Houses like Hundreds Hall in Sarah’s novel didn’t manage to recover after the war and belonged to a lost era. Sarah admitted she had very little sympathy for families like the Ayres in the book. They had inherited a social function that no longer had any meaning. Therefore, they felt useless and had lost their purpose. The Ayres are trying to cling onto the tattered remains of their status.

Roderick, who has inherited the Hundreds estate from his late father, was wounded badly in the war, but as well as his physical scars, he has deeper psychological wounds. Caroline, his sister, is plain and clever, but with few resources is put at a distinct disadvantage socially and far down the ranking in the marriage stakes. Faraday is an M R James-type narrator. He is a local doctor (a working class boy made good thanks to the grammar school education system) and becomes fascinated and drawn to Hundreds House. For him, Caroline is a way into the house. For Caroline, Faraday is her way out. Through Faraday we learn that before the NHS came into being, doctors like him with their working class roots found it much harder to gain the trust of the wealthier patients, who preferred to use doctors from their own class.

There is a lot of unease in The Little Stranger. All the characters are unhappy and trapped.

Sarah reminded us that this post-war period was a fascinating time in history. A Socialist government promised a better Britain. For some this was an exciting time, but for families like the Ayres, it was a very difficult time.

Housing was a hot issue then. There simply weren’t enough houses and there was a drive to build council houses. It was a time of rapid rebuilding and change. Sarah, herself, was a product of the rise of the working classes in that she was born in a 1950s council house. Grammar schools played an important part in this social change. The upper classes were in decline and some, like Hooper, thought Britain was being handed over to the mob, to philistines.

Sarah said she had always found Josephine Tey’s story, The Franchise Affair (also set in Warwickshire), fascinating. It was based on the infamous trial of Elizabeth Canning who became Betty Kane in the book. “She was the original ‘evil char’,” Andrew Davies joked.

Andrew Davies then invited the audience to ask Sarah questions. The first was about research. Sarah said that she does a few months solid research for her novels at the start, then as the story develops, the research narrows down. She does a lot of reading initially to the point where she’s itching to write. Once she feels she knows enough to make educated guesses, Sarah begins to write. There are gaps which she fills in later, although Sarah said she continues to research as she goes along. She reads novels and diaries of the period. Research, she said, is a fertile process for her.

Sarah was asked about her writing day. She said she was very disciplined about it and that moments of inspiration were rare. Every day she has to make herself write. She writes on week days only and usually stops work at 4pm, then sits and reads. However, in the last few months, when the novel is almost finished, she works at the weekends as well.   I was surprised to hear that Sarah aims to write 1,000 words per day. Somehow I thought it would be more. She does several drafts of her novels. She said it was only quite late in the process that she realises what her characters are about. She then goes back and writes the opening - very late in the whole process.

Sarah admitted that she found The Nightwatch her hardest novel to write from the point of view of structure. In the end she decided to tell the story backwards. The novel begins in 1947 and goes back to 1941. What her characters had been through during the war was so dramatic that they hadn’t moved on. They couldn’t imagine a future, so Sarah decided not to give them one and moved backwards.

An audience member then asked which character in her books Sarah was most fond of. She thought for a moment and then said that it had to be Nancy in Tipping The Velvet. She realised that in her later books she’d become preoccupied with the idea of failure and disappointments. In contrast, Nancy has lots of energy. She persists and becomes successful. Sarah said she also liked Kay in The Nightwatch very much. She was also fond of Caroline in the current novel.

Someone then asked, “What’s next?”. She said she had a few ideas and that she was thinking about the period between the two world wars. She said she’d also considered writing a trilogy similar to Philippa Gregory’s Wideacre series.

A lady who worked in a local Waterstone’s then suggested that Sarah’s publisher put stickers on the front of The Little Stranger saying, ‘No Lesbian Love Action’.

The final question of the night was about theme, character and plot. Which came first for Sarah? She replied that theme was always the starting point and that usually she has the whole plot for her novels worked out beforehand. The exception to this was The Nightwatch.

It was good to see a packed house for this event and Sarah seemed to go down a storm.

This was really interesting. Many thanks for reminding me how much I love The Franchise Affair. I haven't read it for many years, so I shall add it to my growing pile!