Back in 2002 when I was editing and publishing QWF (Quality Women's Fiction Magazine), I got a phone call from a very nicely spoken lady asking if I was interested in reviewing the book she'd just published. She told me a bit about it and I remember thinking, here we go again! Since the first issue of QWF in 1994, I'd been sent many self-published books to review, most of which were pretty dire, both in content and presentation. However, Jennifer Worth sounded like an interesting woman, and I thought her memoirs might be a good read, so I told her to send me a copy. You can read the review, which appeared in Issue 39 of QWF in early 2003 (and reading it now, I'm dying to get my red editing pen to it. I think my writing style has improved since then!) below.

Imagine how surprised I was when I saw a couple of years ago that Jennifer's book, Call The Midwife had reached The Sunday Times Bestseller List, as did the two follow-up books. I was even more surprised when, reading through the TV listings recently, that a TV adaptation of Call The Midwife was going to be shown on BBC1. I thoroughly enjoyed the drama and thought it was very true to the book, as well as featuring some very talented actresses. It was with sadness, however, that after the closing credits, I noticed that it had been dedicated to Jennifer who died in 2011. I had so wanted to contact her again to congratulate her on the book's success.

I guess the moral of the tale is that self-published books, even if they are a little rough around the edges, can go on to be published by a mainstream publisher and reach dizzy heights.

Jennifer Worth was a district midwife working in an order of nuns, going around Poplar on a bicycle in the 1950s, when the East End of London was still ravaged by wartime bombs. This book describes with humour and poignancy the experiences of Jennifer, assisting women giving birth in grimly impoverished surroundings.


My first impressions of this book weren't good. The presentation is poor, and I found loads of typos and spelling errors in the first few pages, as well as many exclamation marks. I felt the book would benefit from a good edit. I almost put it to one side, thinking it an amateurish self-publishing venture. However, I was enthralled by the narrative and Jennifer Worth's skilful storytelling technique compelled me to read on. I'm glad I did.


When I first read Call The Midwife it wasn't too long since I'd given birth myself and it made me grateful for all the new technology and sterile surroundings the hospital provided for a rather long and complicated labour, resulting in an emergency caesarean. I don't know how Megan and I would have fared had we lived in Poplar in 1950-something. I'm pretty sure neither Megan nor I would be here now.


This book isn't for the faint-hearted. There are some pretty gory descriptions of childbirth, as well as the general filth some of these women lived in on a day-to-day basis.


Call The Midwife is crammed with delightful characters, however, and you can't help but feel total admiration for the midwives. Once you've read the book I don't think you'd dare complain about giving birth on the NHS again.


There are also some interesting medical and sociological facts in the book. For example, the women of the East End were encouraged to breastfeed, mainly for practical reasons. For example, many found it hard to cope with everyday cleaning, and wouldn't have thought about sterilising baby's bottles for milk.


Jennifer Worth devotes three chapters of her book to stories about the influx of immigrants from the West Indies around that time. Many white women, married to white men, were giving birth to black babies, the consequences of which were heartbreaking in some cases.


All in all, this is an enjoyable and highly informative read, but the book would have been much better had a top publisher's editor worked with Jennifer to make her story the best it could be. 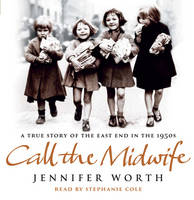 How interesting, Jo. Just shows how important QWF was! I was very pleasantly surprised by the TV programme. I had thought it might be awful. Not so, mainly because of the quality of the acting and the characters depicted. The only problem I had was that despite the mention of poverty, fleas and filth, all the people looked very fresh-faced and healthy, especially the children but I suppose it's not easy to find really malnourished people in the UK in 2012.

This is so interesting. I'm sure that your review must have been very helpful.

I thought the TV programme was very good. What fascinating characters and gritty reality.

I recently read 'In the midst of life' and thought it was brilliant. Although this was her last book which is very sad. Really thought provoking stuff.

This is fascinating, Jo. I enjoyed your review of it and I will definitely read this book.
How sad that Jennifer has died, but how fantastic that QWF played a part in it all.
I'm off to Amazon now!

What a lovely blog and memory too. Like Sally Z I wasn't certain about the TV show but gave a go and thoroughly enjoyed the first episode. Some excellent Brit actresses on board and so watchable. Interestingly this episode attracted more viewers than the final cliffhanger of Sherlock...

A great review for QWF. I read this book and went on to read Shadows of the Workhouse, a scene of which is in tonights episode and if they show the whole 'chapter' it's sure to induce tears. I thought SOTW was the last one so I'll go and see if I can get the last one, sadly, I suspect there won't be any more.

Terrific work! This is the kind of information that are meant to be shared around the net. Shame on search engines|Google} for no longer positioning this submit higher! Come on over and consult with my website . Thank you =)
Big C Microscope Dino-Lite .3M/Resolution 510 X 496