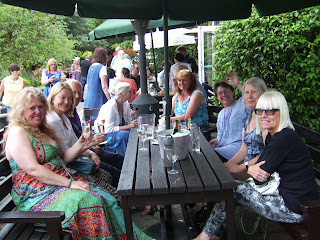 Saturday afternoon was wonderful! Sally and I joined Susannah Rickards, Phil Jones, Lauren Sarno and others on a table laden with wine. We met some lovely people and Lauren invited us to join her in a bottle of Prosecco. We laughed, swapped stories about our writing, talked about fashion, mobile phones and dodgy signals only to be interrupted by James Bond, complete with tuxedo and black tie. No, not the man himself, of course, but our Lee Child ticket blagger who was dressed for the License To Thrill Dinner. Susannah saved the day and took on the role of his minder, as he used my Rover Ticket to gain entry to see one of his favourite authors. I never did get so much as a glass of wine for my trouble!

Sally and I then staggered off towards town where we were due to meet my friend,  Mandy Huggins at L’Albero Delle Noci, a fantastic little Mediterranean restaurant with a cosy ambience in Cheltenham Crescent. Even though Mandy was sitting outside, we still managed to walk past her without seeing her and I had to phone her for instructions of how to get there! The food and service were excellent. Somehow we managed to consume two bottles of Pinot Grigio between us, talking non-stop about Bruce Springsteen, writing, books, travel and goodness knows what else! Little did we know that we needn’t have rushed, as Kate Atkinson wasn’t due to speak until 8.30pm. My programme stated it was 8pm. Still, at least it gave Susannah and Mandy time to finish the complimentary lollipops!

I have to confess I was a little disappointed in Kate. I’m sure I was the only one, however. I don’t think Mark Lawson got the best out of her. Or maybe I’d just read too many interviews with her in the press and therefore there were no surprises. Or maybe I’d had too much wine and couldn’t take it all in. Anyway, I loved her latest novel, Life After Life and relished every snippet of information she gave us about writing it. Apparently, there is a bibliography on Kate Atkinson’s website of all the books she used in her research, so that was something new I learned!

Afterwards we joined the long queue at the bar and I bought a very mediocre bottle of warm Sauvignon Blanc to share. Sally managed another hour with us, before surrendering and going back to The Cairn, not before Mandy had treated us to an hilarious impression of her B&B landlady. The wine magically seemed to improve as Mandy and I gossiped well into the night, although I was rather disappointed not to be surrounded by well-known crime writers, but they were all embroiled in the late night quiz. I watched Mandy stagger off back towards the town and I wended my way back up the hill to The Cairn in the company of Catriona MacPherson who was lovely. I’d already marked her out as an author whose books were right up my street (crime fiction set in the 30s and 40s). Her witty asides and sharp wit had kept me entertained when she sat next to me during the Victorian Crime panel the day before.
Despite waking at 4.45am fretting about my son going off Inter-Railing and worrying that someone had hiked up my bar bill (I’d left my room number passcard thingy lying about The Cairn), I woke again at 8.15am ready for breakfast and eager to attend the Slaughtering the Sacred Cows panel at 10am. Mandy Huggins texted me to say she was running late (hangover, more like!), so would meet me after the talk.
The Sunday morning panel introduced me to crime writers I hadn’t read: Stuart McBride (who was hilarious), Catriona MacPherson (very witty and dry), Manda Scott (who sat in the lotus position throughout) and Cathi Unsworth. I’d been admiring a lady wearing vintage hairdo and clothes over the weekend, not realising it was Cathi. What a great look! No surprise that she lived in Camden! Mandy told me that Cathi is also a reader/editor for Take A Break’s Fiction Feast. Interesting! I loved the sound of Cathi’s books, particularly when she told us a fan had written in saying she’d made Great Yarmouth sound interesting. I gathered her books are edgy and drenched in popular culture. In other words, just my cup of tea. There followed a fascinating discussion about pushing the boundaries of crime fiction and this reassured me that maybe, just maybe, I, too, might get away with my novel not being in the conventional crime novel mould.
And that was it! I hadn’t the stamina for Charlaine Harris, although I was assured that she was an excellent writer and an entertaining speaker. I met up with Mandy again, who was now in panic mode about getting a number for a Bruce Springsteen concert in Leeds on Wednesday (Mandy is a huge Bruce fan). We had a freebie coffee, briefly reconnected with Cath Bore and Katie, before heading off to the town in search of lunch. We decided that, as the queue wasn’t very long, we’d treat ourselves to lunch in Betty’s. The tinkly piano music was perfect for a Sunday afternoon.
Now it’s Tuesday and I’m suffering withdrawal symptoms. I haven’t enjoyed a weekend as much in a very long time. I’d forgotten how thrilling it is to be in the company of other writers and to be immersed in the world of books.
Roll on next year!
Posted by Jo at 06:55

What a super write-up! I couldn't afford to go, alas, so thank you.
Sharon and I are old blog friends.

Sounds an absolutely fabulous weekend Jo. I don't particularly write crime but I love reading it and recently discovered Belinda Bauer - so do try her books.
Did you pick up any leads or interest for your crime novel?

I didn't, Tracy, because I didn't push it. This isn't the place for pitching! However, the whole event inspired me and made me feel I'm on the right track.

Another most interesting post, Jo. The heads in Gucci bags - there's a story there somewhere.

Jo, that was fantastic. I loved the Gucci heads. Another brilliant account of an amazing event. x

I was at the Kate Atkinson talk too. I thought she made the whole writing process sound accidental as though she didn't know what she was writing or why. And I just didn't really believe that was possible. Loved the festival though!