Illness and The Beloved Short Story! 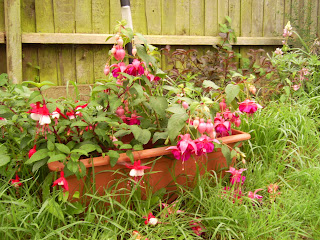 I liken myself to these fuchsias. Bright, cheerful and optimistic a week or so ago, then dead as a dodo this week. Obviously I'm not dead (the fuchsias are, sadly), but I was struck down by the most horrendous tummy bug. Nige thought it was the infamous 'winter vomiting bug' everyone's talking about, although I didn't actually vomit, but plenty of action the other end (sorry to be so graphic!). The griping abdominal pains were excruciating and were coming every two or three minutes in the middle of the night like contractions. In fact, it reminded me very much of being in labour, but without the delightful result!
Enough of that. On the plus side, I have spent the week immersed in women's magazines and daytime TV. I've now convinced myself that I can write fiction for the womags, if only I just sit down and write! I have lots of ideas (I have written those down) and feel I have finally found the right voice. Before I got too poorly I did manage to revamp a couple of stories I'd written for this market back in the late nineties! Yes, it was that long ago when I had a couple of stories published in the womags!
Prompted by one of Sally Zigmond's wonderful blogs, I came up with an idea for The Yellow Room and for this blog. Sally and I both feel that many people who write short stories for competitions and magazines don't actually read good published short stories. How many people educated in the UK study the short story form either in school or university? Very few, because the genre is sidelined in favour of the novel and poetry. So, why not feature a well known and beautifully crafted short story each issue and talk about it? Tickle readers' tastebuds, as it were. Good idea? Perhaps invite readers to talk about their own favourite short story and why they like it so much. What have they learned about the craft of short story writing by reading this particular story?
How about it? Is there a short story which really struck a chord with you and taught you a little more about the genre? Do you read short stories on a regular basis? Do you own collections of short stories? I'd be very interested in hearing from you!
Posted by Jo at 03:11

Glad you are feeling better, Jo.

I do enjoy reading good quality short stories. I also enjoy writing them, because it is an excellent discipline to take into novel writing, but have to confess to concentrating on ones that I think I have a chance of selling. C'est la vie.

This is really interesting. I have a degree in English Literature but can't remember any attention being paid to short stories at all. I really only started reading short stories when I started writing creatively. I started with Hemingway and some of the other classics, but am now branching out a little. I recently read a book of short stories by Kelly Link, an American writer, which is excellent.

I studied short stories as part of my MA with the wonderful E A Markham, who died earlier this year. I've always read them and written them. And I don't think that they're easier to write just because they're short: that brevity makes them difficult.

I used to buy collections but don't so often now, because they just aren't as available as they were in the 1980s--I remember there being whole stacks of shelves dedicated to anthologies of short stories in my local bookshops then. Happy days.

In a collection of short stories called 'Fanfare' is one by William Trevor called 'The Dancing Master's Music.' My feeling on finding a good story is usually tinged with envy :-) but in this case, I was simply grateful.