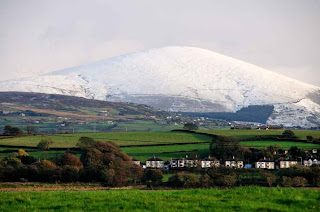 Our week away in Snowdonia seems months ago. And yes, there was snow on the mountains. It felt like Christmas, not the October half term holiday, especially as there were lots of presents around. Megan turned seven while we were there.

The weather was cold and mostly wet. However, we found plenty of things to do, mainly revolving around Megan's interests. She was in her element as we visited a petting zoo and she go to hold not only a large rabbit and a guinea pig, but two snakes, one of which was rather a large python! She's a braver soul than me! 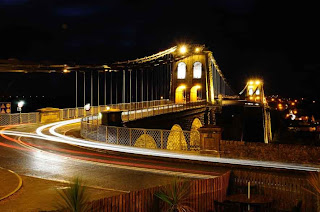 I love this photo of the Menai Bridge joining Anglesey to the mainland. This is the view from a little pub called The Antelope, which does very cheap and tasty bar meals. The Pinot Grigio wasn't bad either!

On the last night of our holiday there was a spectacular firework display over the lake at Brynteg, the site where our holiday lodge was situated. They also built a huge bonfire, which added to the general autumnal atmosphere. It was Halloween and I found a tacky pair of flashing devil's horns for Megan to wear. Highly appropriate! It also made it very easy to spot her in the crowd.

Since I've been home I've been reading the 115 entries in the first Yellow Room Short Story Competition. I have to say I find the standard pitifully low (apologies to any entrants). Even the entries I've shortlisted don't blow me away. Maybe I'm expecting too much?
The main problem with most of the stories is that they 'tell' rather than 'show'. It's amazing how many short story writers, especially beginners, just can't seem to grasp what is meant by 'show, don't tell'. I think the only answer is to read as many good published short stories as possible. Go to the library and take out collections by Alice Munro, Helen Simpson, Kate Atkinson, Katherine Mansfield or buy competition anthologies from The Bridport and the like. Subscribe to magazines like The Yellow Room!
Other problems are titles. I don't think I've ever come across such a selection of dreary titles, including 'The Message', 'Cat', 'A Spooky Assignment', 'The Library', 'Gifts'. Opening paragraphs don't grab the reader's attention. There isn't any narrative tension; no hook; nothing to make the reader want to continue. Boring, boring, boring. No inventive use of language. Just a straight narrative: So and so did such and such, then this happened. It's like reading a collection of stories written in exercise books by ten-year-olds.
I'm sorry to be so harsh and there are exceptions, but it makes me wonder about the people who enter these competitions. Do they have any idea of what a short story should be? Do they study their craft? Do they read? And why don't people who are submitting to the magazine, those who can clearly write well, enter the competitions? They'd sweep the board.
Rant over.

Well, if only I'd known about the low standard, I'd have entered my story and maybe it would have stood an excellent chance. Or maybe it wouldn't. I know my stories have bags of room for improvement. But, yes, I agree that the best way to learn how to write stories is to read lots of good ones. I've read The Yellow Room mag first just for pleasure (and what a pleasure it was), but now I'm reading it again to take notice of how they did it. I'm learning lots.

Jo
Glad you enjoyed your trip to N. Wales. Mr B is from Anglesey so for me it's almost a home from home.Great picture of the bridge!
What a shame you didn't have a better resonse to your comp. Early days? I know lots of very competent and in some cases talented writers who I'm sure could do better. I'll make sure they know about TYR! AliB

Thank you, AliB. It would have been nice if really competent writers had entered. Reading the entries has become a real chore, which is a shame.

Lovely pictures of Wales and the mountains! And your blog gives really good advice on the writing... as always.