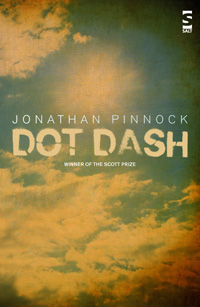 It has been far too long since I last updated this blog and for that I apologise. I have no excuses. I really didn't think I had anything interesting to say, which is why I'm delighted to welcome a guest blogger today.

When Jonathan Pinnock asked on his Facebook status whether anyone would like him to do a guest blog, I jumped at the chance. I'd had a little communication with Jonathan asking for tips on entering The Scott Prize, as I'd almost finished putting a short story collection together. He very kindly answered my questions, then agreed to write the following piece. I then rushed to the Salt website (http://www.saltpublishing.com/) to purchase Dot Dash and have been reading the stories all week. I wasn't disappointed. I strongly recommend you purchase the collection, if you have any interest in what makes a good short story. Here's what Jonathan has to say about The Scott Prize:

The Scott Prize (http://thescottprize.co.uk/) is an international annual prize for a first collection of short stories. It was set up by Salt Publishing in 2009 and is now pretty much the only way for an unknown short story writer to get a collection published by them, as they do not accept unsolicited submissions. The fact that hardly any other publishers will consider publishing a short story collection unless it’s by an established author means that the Scott Prize has massive significance for anyone who has an interest in the short form.

I’d been writing seriously since 2005 and submitting work since 2007, which meant that by 2009 I was building up a reasonable portfolio of work. But when I first entered for the Scott Prize in that debut year, I got absolutely nowhere. I wasn’t even shortlisted. I was more than a little peeved about this, as I’d had a few individual successes by then and I obviously thought I was ready for the big time. However, in my heart of hearts I knew that there were several fillers in my proposed collection. And when I read the collections that had won that year – especially Tom Vowler’s “The Method” – I realised I was going to have to raise my game if I was going to have any chance of being selected in future. There was no room for fillers.

So I kept on writing and I kept on submitting and I notched up one or two more decent hits, including BBC Radio 4’s Opening Lines. This meant that I could chuck out a fair bit of the chaff and generally make the collection a bit stronger. The other thing that had happened was that I’d been playing around with TwitFic (Twitter fiction – complete stories in 140 characters or under) a bit more by then and I had quite a collection of very, very short pieces that I could use as a kind of punctuation between the longer ones. In fact, I had just enough short pieces to make it possible to alternate them. And that, in turn, led to the title of the collection.

When I first entered the Scott Prize, my collection was entitled “Hidden Shallows and Other Stories”, which was – to be honest – a bit mundane. To move away from that to “Dot Dash”, a title that simply reflected the structure of the book, was quite radical and that gave it another chance to stand out. I think it also reflected the playful nature of a lot of the content. I submitted “Dot Dash” to the Scott Prize on October 6th, 2010 – for once in my life well ahead of the deadline.

Nine days later, I submitted my first novel “Mrs Darcy versus the Aliens” to Salt’s new science fiction imprint Proxima and just over a month after that it was accepted for publication. That book was then scheduled for publication in September 2011, which meant that when I was eventually announced as one of the winners of the 2011 Scott Prize, publication had to be delayed for a year in order to avoid confusion between two very different books by the same author. So that’s why “Dot Dash” is only just appearing now.

But it’s been worth the wait. My box of books arrived from Salt last week, and they are utterly beautiful. One of the things about being published by Salt is that you are guaranteed to have an arresting cover, and “Dot Dash” is no exception. I feel very privileged to have my name on a cover with that iconic “S” logo in the top right hand corner.

Jonathan Pinnock was born in Bedford, England and studied Mathematics at Cambridge University. He subsequently stumbled into a career in software development and has been there ever since. Somewhere along the way he wrote one book on software development and co-wrote a further twelve. His preference, however, is for fiction and his first novel Mrs Darcy versus the Aliens was published by Proxima in 2011. His short stories have won numerous prizes and have been widely published. He is married with two slightly grown-up children, several cats and a 1961 Ami Continental Jukebox. He blogs at www.jonathanpinnock.com.
Posted by Jo at 02:44

Thank you, Jo and Jonathan, for a fantastic post.

Congratulations, Jonathan, on your well-deserved success. And I think Salt are amazing too.

Thanks for highlighting this competition, I'd not heard of it before. Will think about entering a collection next year if still running. Dot com looks worth a read and others in their collection too. A great publishing group!