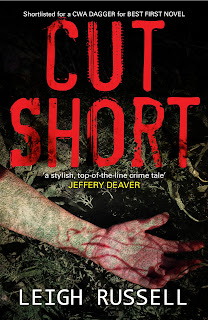 I was delighted when Leigh Russell, an international bestselling author of crime fiction, contacted me volunteering to be a guest of The Yellow Room blog. This is thanks to the magic of Twitter. I've been relying heavily on the latter to promote The Yellow Room and sell the remaining copies of Issue 8, as I haven't generated enough income from this print run to make ends meet. The Yellow Room Magazine is sadly in danger of folding. Please do urge as many of your friends as possible to purchase a copy from the website (www.theyellowroom-magazine.co.uk).

It has been a pleasure interviewing Leigh for my blog. 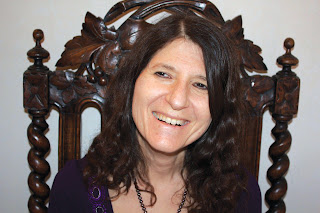 When did you start writing seriously and what sort of things did you write?
CUT SHORT was published in 2009. It was shortlisted for a CWA Dagger Award and went on to become an international bestseller. The story developed from an idea that just occurred to me one day as I was walking through my local park. I started to write the story down and after six weeks of compulsive writing, I finished the first draft.

What made you decide to write a crime novel?
I never made a conscious decision to write a crime novel. My publisher phoned me two weeks after they received my first manuscript and after a few meetings they offered me a three book deal. So once I had finished working on CUT SHORT, I was already contracted to write two more crime novels. ROAD CLOSED and DEAD END followed CUT SHORT in becoming bestsellers, so my publisher then asked for another three books in the series. The first of these, STOP DEAD, is out in print in 2013 and available to download this December. At the moment I am committed to writing two more books in the series, after which I hope my publisher will offer me a further deal. As long as people keep reading my books, I’ll keep writing them!

Did you have a story/outline in mind before you began to write your first novel?
When you write a book you are taking your readers on a journey. I always know my starting point, and I know the destination, but the route between the two develops and evolves as I’m writing.

Do you think it’s possible to be a ‘fly by the seat of the pants’ crime writer?
I know many brilliant crime writers. Some are rigorous planners, some fly by the seat of their pants. It seems that both work, for different people. Every writer has to find their own method of working.  Although I plan my stories in advance, I also like the writing process to be organic and creative. That, for me, is part of the fun of writing. I know where my narrative is heading, but I’m never quite sure of the detailed route to get there before I start writing.

How much planning and research do you do beforehand?
I do a lot of research. I’ve visited police stations, spent time with a Murder Investigation Team, a fire station, and a closed prison, to name just a few places I’ve visited in the course of my research. I’ve taken advice from leading experts in DNA, finger prints, human remains, and many more.  The research is always fascinating. My advisers aren’t necessarily leading experts in their fields. They can be market traders, scientists, IT technicians, an acquaintance who has suffered a broken nose... anyone who can help me to understand a situation that I’m writing about but have never experienced.

Do you contact experts in a particular crime field?
Frequently. You can do a lot of research on the internet. If you want to find out a tiny random snippet of information, like what time the sun set in London on October 30th 1972, you can. But I prefer to consult real people. And here the internet can be phenomenal too. I could spend six months researching a question on a point of DNA and still come up with the wrong answer. One quick email to a leading expert and the right answer can be available in seconds.

What do you think makes a good crime novel?
In common with all fiction, a good crime novel has to keep readers turning the pages. There are three main elements to this: suspense so readers want to know what will happen next, engaging characters so readers actually care about what happens, and good writing.  Most of my reviewers describe my books as ‘page turners’, The Times describes my work as ‘psychologically acute’, and ‘well written’, so hopefully I cover all three of these elements in my books.

Have you got any opinions about a woman’s position in the crime writing world? Is it true, for example, that the genre is dominated by male authors?
I’m not sure that PD James, Ruth Rendell, Val McDermid, Lyndsay Duncan, Lynda La Plante, Sophie Hannah, Ann Cleves, Tess Gerritsen, Mo Hayder or Patricia Cornwell would agree with that statement, to name just a few.
Do you have a writing routine and how many hours a day do you spend writing?
Eugene Ionesco said: “A writer never takes a vacation. For a writer life consists of writing or thinking about writing.’ What goes into creating a book is so much more than the physical process of writing.  What takes time is thinking and research. The most important part of the process is the thinking. So it’s impossible to put a time on writing. Do you include the time I spend driving in traffic (thinking), queuing in a supermarket (still thinking) lying in bed (thinking). When I’m in the middle of a book, the narrative is in my head all the time, although I may only spend two hours on my keyboard.

What motivates you as a writer?
I’ve no idea! I just started writing one day and couldn’t stop. It surprises me now that I never stumbled on my passion for writing earlier. I didn’t start until my children had grown up and left home, and I stepped down from running a busy department at work. Before that, I guess I didn’t have the time or the energy to think of writing a book. Now that I’ve started, the motivation takes care of itself as I’m always working towards my next publisher’s deadline. But even without that I think I’d still be writing every day. I just love it! I’m totally hooked.

What inspires you?
I’m fascinated by my killers. Each of my novels explores a character with a different motivation for murder. What is it that drives people to behave in such an extreme manner?

Do you feel uncomfortable writing particularly gruesome scenes or about psychologically sick characters?
No. I wouldn’t write anything that made me feel uncomfortable. I don’t like reading about crime in real life. It’s appalling, one human being causing another human being to suffer. There’s nothing redeeming in it. But in fiction, crime metamorphoses into form of entertainment. We seem to be able to compartmentalise things in our minds, like animal lovers who eat meat. I don’t understand it, but I wouldn’t want to overanalyze it too much in case the process loses its magic.

How did you go about securing an agent and finding a publisher?
I found a publisher who specializes in crime and sent my manuscript off in a large brown envelope.  These days we communicate manuscripts by email, but five years ago when I started, we were still using hard copies. They responded quickly.  Having found a publisher, I never went through an agent and I still don’t have one. But I think my story is atypical. After I sent off my submission I saw on my publisher’s website that they don’t accept unsolicited manuscripts and kicked myself for wasting a stamp. But somehow they happened to look at my story, and loved it.

What gives you the confidence to write crime fiction? Do you ever suffer from self-doubt?
I’m too old to take myself too seriously, which helps. Because I’ve always had a publisher’s deadline I haven’t really had time for any serious self doubt. I just have to press on.

What do you think of authors turning to self-publishing on Kindle? Does it have the same kudos as going down the traditional publishing route?
I have no experience of self-publishing, so I’m not really in a position to comment on it other than to say it’s not something I would ever consider. There is more kudos – not to mention more money – in going down the traditional publishing route. It’s also much easier as my publisher provides everything: editor, proof readers, cover design, production, promotion and distribution. All I have to do is write the books, which is the only part of the process I really want to do. I couldn’t be bothered with purchasing ISBNs, posting books on amazon, and everything else my publisher organizes.

Where do you see the future for crime writing?
I would say the future for crime writing is looking quite robust.  It is a popular genre, and its appeal appears to be growing. I think there are several reasons for this, apart from the fact that there are so many brilliant authors writing in the genre. As the influence of religion is declining in society – in some areas at least – people are casting around for something to replace it.  Crime fiction, like religion, examines issues surrounding our mortality, and seeks to deal with the feelings we all feel about our inevitable death in a controlled and secure ‘other world’. It also tackles issues of good and evil, offering us a moral compass that we all look for in life. We want our experience to make sense. So often, in the real world, it doesn’t, but however disturbing the narrative, the reader knows that at the end of a work of fiction, some kind of moral order will be restored. So crime fiction is thrilling and terrifying, but ultimately reassuring.

Finally, can you tell us a little about the novel you’re currently working on?
STOP DEAD is in production so I’m working on the sixth book in the series. CUT SHORT, ROAD CLOSED and DEAD END are set in Kent, with a York connection in DEAD END.  In the fourth book in the series, DEATH BED, Detective Inspector Geraldine Steel   relocates to London, leaving her sergeant, Ian Peterson, in Kent. The series has been so successful that my publisher has asked me to write a second series, featuring Ian Peterson, who has become a popular character in his own right. I’ve just finished the first draft of the first Ian Peterson novel and have sent it to my publisher. I’m keeping my fingers crossed they like it! Now I’m working on the sixth Geraldine Steel novel. As with all my books, it starts with a body and everything spins out from there.
Posted by Jo at 09:14

Thank you again for interviewing me here, Jo. I just want to add that when I wrote 'I may only spend two hours on my keyboard' I should have written 'two hours a day'! I know I'm fast, but even I couldn't write a novel in two hours... or even a short story. Although one author (I think it was Hemingway) won a bet by writing a short story in 6 words: 'For sale. Baby clothes. Never worn.'