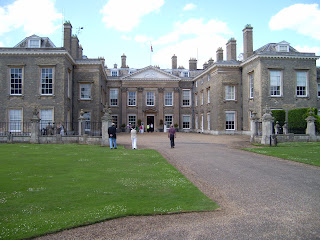 I've been putting off writing about this. Actually, I was forced to put off writing about this due to my PC problems earlier in the week (some of you may already know that all my files and data have now been retrieved by the lovely Nige), and now it seems too much time has passed since the event to recall it in detail. I hate it when this happens! So, here's a brief summary...(in two to three parts!)...

The Althorp Literary Festival took place from Friday, 12th June until Sunday, 14th June. The weather couldn't have been better. Clear blue skies, sunshine and a cool breeze. Perfect for wandering around the grounds of a stately home in between talks. It was a pity about the swarm of greenfly, lots of which attached themselves to my hair. Very attractive!

Fern was lovely. I'd expected her to be rather smug and aloof, but she wasn't at all. She was approachable, friendly and had a twinkle in her eye. She also looked a lot slimmer and of slighter build than she does on TV. She was at Althorp to talk about her autobiography, which I'd read in the few days leading up to the talk. I was lucky enough to get a front row seat, and she made lots of eye contact with me. She certainly knows how to engage an audience. The most interesting part of her talk, for me, was when it came to the question and answer session. No, she hasn't fallen out with Phillip Schofield. And who has she interviewed who she really disliked? Mmm, think fat, grey haired restaurant critic with initials MW!! She told a great funny story about her charity cycle ride across Cuba. At the hotel one evening a fellow cyclist was given a dried up clementine segment to garnish her mojito cocktail and putting it down on the table, the woman compared it to her clitoris, which had suffered from a certain amount of saddle soreness. No, another friend said and promptly brought her first down to flatten the clementine, now that's more like it!

I guess you had to be there! Asked if her children were following in her footsteps in television, Fern mentioned her twin sons, 15, were in a rock band. She talked about their practices and gigs. Ah, so we had something in common. Matthew, my son of 14, has just joined a rock band. I could empathise! So, when I went to have my book signed, I mentioned this. Fern laid a hand on my arm, 'Wish him the best of luck from me'. Aah! Sweet!