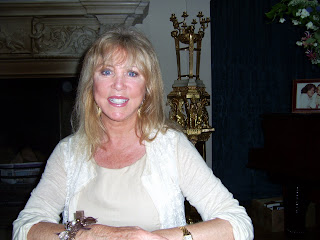 The first thing that struck me about Pattie Boyd was how young she looks for her age (she's 64, I think!), then wondered if she'd had any work done! The second thing was how nervous she looked. I'm not surprised. The room was full to capacity. Surprising, really, as I wouldn't have thought many people had heard of Pattie Boyd. However, she was married to first George Harrison, then Eric Clapton. She inspired such songs as 'Something' written by George, then 'Layla' and 'Wonderful Tonight' by Eric. She was a successful model in the 1960s, appearing on the front cover of Vogue with Twiggy. Maybe people were there because they wanted to be in the same room as a bit player in the legend of the Beatles? I think that's probably why I was there and why I'd asked Nige to buy me a copy of her autobiography two years ago.

One of the first things Pattie said at the beginning of the interview was that George Harrison had been the love of her life. This then begged the question as to why she ran off with one of his best friends, Eric Clapton. I mean, in the looks department Eric shouldn't have stood a chance. Okay, so he may have been the better guitar player. No, Pattie admitted that Eric simply wore her down. From the moment he sent her an anonymous letter declaring his undying love, he pursued Pattie relentlessly. Her marriage to George wasn't going too well. George liked to shut himself away at their 24 bedroomed mansion, Friar Park and spent hours chanting (he'd recently become obsessed with the Hari Krishnas). I guess there's only so much chanting you can take. Life with Eric promised to be more exciting. He took her on tour with him; they went to lots of parties. The fact that he had a drug habit (cocaine predominantly) and was an alcoholic (lots of brandy!) didn't come into it at first... only later, which was why they divorced. Then came three years of therapy, so Pattie could find herself. She'd only ever been a rock star's wife for the past ten years. Her salvation came in the form of photography. She put David Bailey on the other side of the camera and asked his advice, as you do. A successful exhibition followed, and now she's a fully fledged professional snapper.

Someone asked was there anything in her life she'd change? Pattie said she wished she'd been wiser when younger. Yes, then she probably would have worked at her marriage and not given into the dubious charms of Eric. Was she still in touch with Paul and Ringo? Yes, she lived just down the road from Ringo and went to his parties. So did Paul. Paul is very happy again now, she said. He sends his love. (Great flutter of excitement for Jo, who has been a McCartney fan since puberty!)

She seemed a friendly enough kind of person. She was much posher than I expected and spoke just like Joanna Lumley. In fact, she reminded me a lot of Joanna Lumley. Interesting that they were both born in India.

The most interesting aspect of Pattie Boyd's talk was when she spoke of her relationship with Penny Junor who helped her write the book. She said that it was fraught with problems. Penny was trying to be Pattie. Spooky! They'd go out to lunch and Penny would wait to see what Pattie was ordering and order the same. The 'autobiography' went through four drafts before it was published and still I got the impression Pattie wasn't happy. 'It didn't sound like me', she said. Why didn't she write it herself? Wish I'd have asked her now.

The highlight was at the signing at the end. I had a nice little chat with Pattie, as you do, and she was very friendly. I said I'd read Eric's autobiography immediately after reading hers. 'What did you think?' she asked. I told her I was surprised at how similar their recollections were and how they both seemed to have the same perspective on the same events. 'Yes,' she said, 'Other people have told me that.' She then went on to ask me if I realised my copy of her book was a first edition? She showed me the inside cover. A little figure 1 all on its own! 'It's one of only six,' she told me. 'Hang on to that, Jo!'. Yes, I will. And now it's a signed first edition. Could be my pension!

Ooh, lovely! How nice to get a bit of goss (and well done on the first edition!). Enjoyed previous post, too (my daughter also said that Fern is quite teeny-tiny in real life, looks bigger on account of being boobalicious).

I used to idolise Pattie when I was a teenager and was insanely jealous when she married George, my absolute favourite Beatle. I seem to remember she wore a fabulous mini fur coat (it wasn't frowned on then) and long boots to get married in! How I envied her! She used to appear regularly in Jackie magazine.