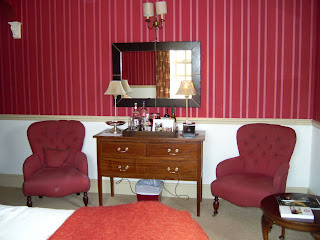 The weekend of 20th June wasn't known for the best weather this summer, but was perfectly pleasant with no rain. A relief, as Nige and I had planned a romantic weekend away to celebrate our third wedding anniversary. The children were duly dispatched to Nige's mother early on Saturday afternoon and off we went 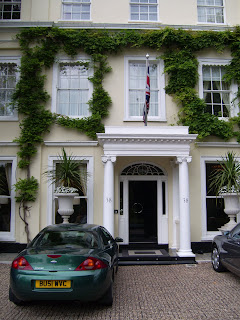 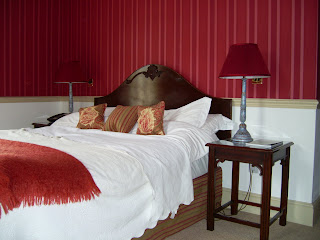 The Hotel on the Park was suitably upmarket and we were shown to our room by the friendly receptionist. On entering the room there was music playing. Bit odd, but we thought no more about it. Unbeknown to us, this set the precedent for the whole of our Cheltenham experience.

After a suitable interlude, resisting the overpriced mini-bar (half a bottle of warm white wine on a tray - £17.50), we set off for the Everest Indian restaurant, which I'd found on the Internet and booked in advance. It looked promising from the ornate facade, but a little less so inside, despite some wonderful wooden carvings around the bar. Music again, and not the subtle tones of the sitar, but mediocre pop music from the 1960s. We ordered, and our starters arrived. I had vegetable samosas. They didn't look too bad, but when I bit into them, the peas were frozen! I sent them back and a second lot arrived, which were better, but it was obvious the restaurant wasn't up to the standard we're used to in Rugby. The main course was pretty awful, too. It's obvious, isn't it, when the food isn't completely fresh? The colours are all the same. Still, at least they didn't charge us for the samosas.

We then went in search of a nice pub to enjoy a few drinks before heading back to the hotel. Cheltenham seemed very different by night from how I remembered it a few years ago when I went to the literary festival with Sally. There were still the blaring police and ambulance sirens, though. Every pub we tried in the centre of the town had music blaring out from the many speakers dotted around the room. It was at such a volume that you had to shout above it to be heard. It didn't make for the most relaxing evening. We decided to head back towards the hotel and have a look at the two more traditional looking pubs we'd passed earlier. The first had a karaoke session in full swing and the second, a live band. We decided to take a chance on the second one. The live band was one of the most atrocious covers bands I've ever heard. They totally murdered 'I Predict A Riot' (aptly named), 'Fat Bottomed Girls', 'Give Me Shelter' and Led Zeppelin's 'Rock n' Roll'. They had two lead guitarists who were both playing in a different key for much of the time. It was pretty hilarious in the end. At least the beer was good (the wine was like vinegar). Once the band stopped, we were just saying how nice it was to sit and drink without any background music, when very loud dub reggae started blasting through the speakers. So much for that! What a night! Silence certainly isn't golden for the people of Cheltenham.
Posted by Jo at 02:48

"mediocre pop music from the 1960s."
Is that possible, Jo? You should have come down to Ludlow!

There's nothing worse than so-called musicians with tin ears. Nige should have offered to play!

I remember in my student days a band that were so bad they were booed off the stage. They had completely murdered the Yardbird's classic 'For Your Love.' (Remember them? Brilliant. Eric Clapton was a founder member.)

As they were quickly packing up, the organisers put the original disc on the PA system much to the audience's delight who clapped and cheered. The band were not happy and left us all with gestures and language I would blush to describe.

Silence is indeed golden, and non-thumpy-music pubs seem to be like gold dust these days.

I have a theory about music in pubs. I think it's not so much aimed at the clientèle but for the benefit of the bar staff! I even have a solution to the problem: dismantle the PA system and install fold-back speakers under the bar, facing inwards to the staff. Then the customers can drink in peace and hear themselves think.